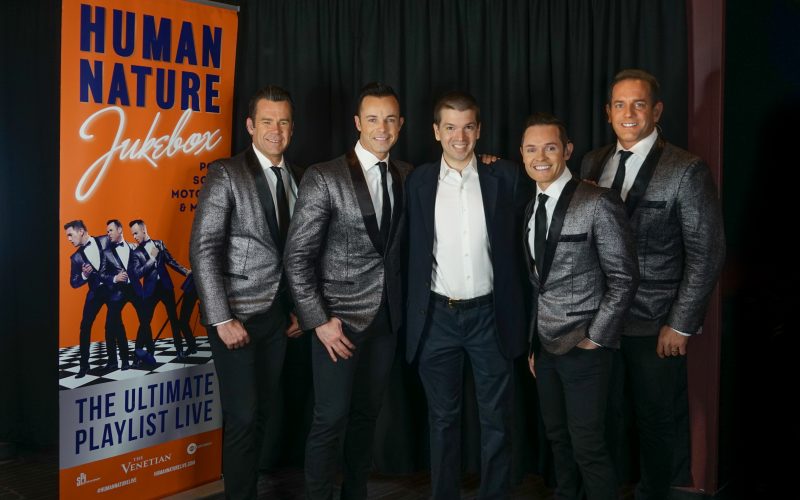 One of the great music acts of today is based in Las Vegas. Located at the Sands Showroom inside the Venetian, for the last few years, are four guys from Australia who entertain hundreds of people at every show of their residency. They are reminding people of great music from the past while putting their own original spin on it. It was music legend Smokey Robinson who brought the group Human Nature, composed of brothers Andrew and Michael Tierney along with friends Toby Allen and Phil Burton, to the Last Vegas Strip almost a decade ago.

In their show, they sing everything from classics like The Ronettes Be My Baby to Ed Sheeran’s Perfect. The 90 minute show pays tribute to the jukebox. They sing anything from the past to present and they do it well. Make that very well. The group of four men have been together for almost 30 years, sold over two million albums worldwide, have five top 10 hits worldwide and opened up for musical acts around the world, including Michael Jackson and Celine Dion, among other accomplishments. See our photo with them before their show back on April 4th.

A show for all ages, the guys from Human Nature give their all with stellar vocal performances and certainly give the audience their money’s worth, as they go through their non-stop performance. With so many hits, there is only so much time, but they tribute everyone from The Beatles to The Beach Boys and find time to sing some of today’s popular music as well. You will leave Human Nature Jukebox: The Ultimate Playlist appreciating the history of music.

And yes, they were one of those boy bands at the beginning of the 2000s that stole hearts. Part of the show makes fun of their past, when they were Australia’s most famous boy group. However, more than a decade later, this boy band is now a group of men who are singing a diverse selection of songs and reflecting with their audience on how the music of the past led them to achieving the impossible dream of coming to America and performing in the Entertainment Capital of the World, Las Vegas.

To say their show is worth seeing is the understatement of the year.

You can find more information about Human Nature Jukebox: The Ultimate Playlist at the Venetian and purchase tickets clicking here.