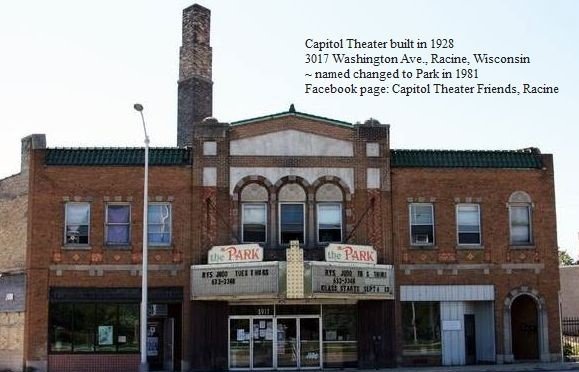 Racine, Wisconsin is a city on the shores of Lake Michigan. You may have never heard of it, but it is home to the Horlick Malted Milk Company, Little Golden Books, and the Capitol Theater, where Wisconsinite, guitar prodigy Les Paul performed at age 14. The theater, built in 1928, was granted historical landmark status in December of 2020. How then is it is now facing demolition?

Now, more than ever, cities need spaces where people can come together regardless of race, creed, or political affiliations. Music and performing arts strengthen community ties and identity. If restored, this theater would become a multi-purpose historic and unique public venue for stage productions, concerts, conventions, symphonies, special events, movies, receptions, exhibits, lectures, Wurlitzer organ performances, and more. How about a vaudeville festival? Or a Les Paul Fest!

The Capitol Theater has a story like that of a variety of historically significant theaters around the country. Many of those have been given a second breath. The Capitol Theater, however, is scheduled to be torn down.

The owner of what is now known as the Park Theater – the latter day name of the Capitol Theater – failed to pay taxes for years and let the property fall into disrepair. The City of Racine building inspector, Ken Plaski, followed protocol when the owner was non-responsive, but in an October 28, 2020, public meeting, he did confirm that the building could be saved. Per the city’s minutes: “[City Inspector] Plaski stated any structure can be saved with the proper know-how, money, effort, and time.” At a later date, however, Plaski condemned the building, and a contract to raze it has been authorized. Here is where it gets interesting. Three other expert opinions say the building is stable and can be saved. There is a group raising funds to restore it. And they have many good plans and reasons to save this building for the enjoyment of tourists and locals.

Citizens of different backgrounds have been working on this effort since 2018. The Capitol Theater Friends Restoration Committee and Advisory Board are working with the West Racine Alliance, a 501(c)3 non-profit organization of local businesses and neighbors. Once the building is ready to restore, an independent non-profit for the Capitol Theater will be formed.

The Capitol Theater has been evaluated by two structural engineers and an architect. They find it is a stable, solidly constructed brick building and the basement is dry. In November of 2020, a drone was used to photograph the condition of the roof and brick walls. A few roof leaks and some exterior masonry need repair. The Capitol Theater Friends Restoration Committee and Advisory Board has already raised enough money to make certain exterior repairs, as well as repair the roof.

The amazing original theater stage, an elaborate decorative proscenium, original curtains, orchestra pit, stenciling, ornamental plasterwork, wide ceiling cove, decorative dome, and arches still exist. Also, a beautiful terrazzo floor has recently been uncovered. Doesn’t this sound much better than a pile of rubble? Many people in Racine and around the country think so.

All that is needed to give this project a chance, is the will of the officials of the City of Racine.