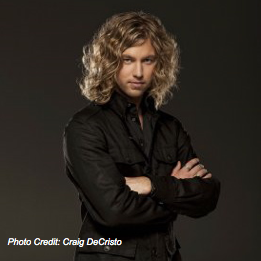 Imagine going for two decades without ever watching a daily soap, football game, the weekly reality show or drama. Too many Americans this would seem to be something only the Amish would participate in. The third runner up on this year’s American Idol Casey James has lived through that experience. It ended up shaping his perspective in a whole different way by not being exposed to corporate brands and materialistic things every day.

So for those who heard that James might become the next guy to give women roses and break their hearts on ABC’s The Bachelor, that report just isn’t true. He wasn’t aware of the show or what it was about until he was informed during a recent media talk. Currently out on the American Idol’s Live Tour, Casey says that all he wants to focus on is his music and love will just have to wait.

Listen to the Casey James CYInterview:

Chris Yandek: You’re now out on the American Idols Tour, I’d like to ask you starting off, what new things have you learned about yourself on this tour?

Casey James: “You know it’s a great question. (Laughs) You know, I think as far as learning something about myself, it’s in the wait until after the situation is in it to say that. You know what I mean? I’m still kind of in it so let’s wait till it’s done and then I’ll be able to answer that better.”

CY: Well, recent reports stated you had a recent sinus infection the start of the tour. How are you feeling?

CJ: “I absolutely was surprised. I was shocked just to make it through the very first audition to be honest with you. It was, I just didn’t think that it would be an outlet for me as a musician, a working musician to do well, but you know what? I was way wrong and never ever be more wrong in my whole life because it’s changed my whole life and I’m so thankful for it.”

CY: So the fact that you were part of the last top 10 to be judged by Simon Cowell, do you have any expectations, hopes to get advice from him as you continue your music career?

CJ: “I wouldn’t say that. I think the show is what it is for to get people exposure and to allow them to do what they want them to do and it’s something you go through the whole standing in front of a panel of judges because that’s the TV format and they speak and that’s how it goes. But I think after the show is over with, I think that’s pretty much it for that. You know what I mean?”

CJ: “No. I don’t. Thing is I don’t. I evaluate myself and by that you obviously listen to those around you and, but I don’t tend to value one person’s opinion more than anyone else’s. We’ve all got them and you just try and take a collective poll. If one person doesn’t like it that’s great, but everyone else on the planet might and then if, so on and so forth. It would be great, but I wouldn’t you know I wouldn’t place any more emphasis on that than anyone else’s opinion.”

CY: This summer a lot of the major musical acts across the country including Rihanna have had to cancel shows. The American Idols Live Tour has been no different. Has this been another piece of the music education for you and how is everyone else reacting to the canceled tour dates?

CJ: “Sure. Yeah. It’s just part of it and you just kind of deal with it and obviously we’re all bummed out that we get a little less shows, but that’s the way it plays out. I’m just, to be honest with you, I’m really super excited to have as many shows as we have so I feel really lucky and looking forward to the shows we do have.”

CY: Do you think not having a TV in your house for 20 years was the best thing that ever happened to you?

CJ: “I think it definitely shaped me as a person and it just makes you, you put emphasis on different things. I mean I’ve just I guess because I wasn’t surrounded by commercials and advertisements and things like that I’m just the type of dude that I don’t need anything. I don’t. I just don’t. I don’t even think of it like as far as material objects go I don’t think oh I need this or I need that. I can’t remember the last time I bought something for myself you know. Not only that, but you just kind of roll with your own fads and fashion and all those things. You just kind of do your own thing and I spent my time doing – playing guitar or being outside or reading. Your focus is just in different places you know. I was gonna say I think it definitely changes you. It shapes you in a different way instead of being regardless of how you look at it you’re shaped by what you’re around and when you’re not around it you just, it made me a little bit different.”

CY: Obviously to be worth anything in the musical industry you have to spend a lot of dedication and practice on your craft. Here you are right now. We go back to the thing about the television set. Do you think that some of America’s population is distracted by all these electronic devices and has made the country lose focus? You say I don’t buy materialistic things, I don’t buy those kinds of things for myself they’re not important to me, but do you think there is a lack of focus among some people on those kinds of things?

CJ: “I definitely feel like people, there’s always room for people to be more improved on what their focus is. Whether or not I think people are too focused on something, I wouldn’t really say that, but I definitely think that there’s always room for improvement. I think people should be more focused about the way they treat people and what they can do for everyone else around them rather than what’s the newest thing going and how can I be cool, but that’s always going to be the case. I think it always just starts with one person saying, what can I do today to make the world a better place? And I know it sounds a little bit corny and stupid.”

“But I mean if you just try to do one thing, maybe just one thing you know, if everyone did that think about you know how things would be. So yeah I think sometimes people’s focus is in the wrong place, but that’s not for me to say, but I definitely will say that there’s always room for improvement.”

CY: I keep hearing rumors that you’re interested in doing The Bachelor. Whether you ever considered doing that show or not being you’ve already been through one reality TV show, I’d like to know what do you think of all the break ups, negative press around a show like that? Wouldn’t you worry that some of those girls just wanted to date you for your fame if you did end up doing something like that? Isn’t that just kind of walking into like a double-edged sword if you would ever do something like that?

CJ: “(Laughs) Obviously I don’t have a TV so I didn’t even know what the show was about and I just learned from one of the recent interviews I did what the show was about and I had really no idea. So to be honest with you, I mean TV is one thing, acting is one thing, reality shows all of that stuff and doing something like that, I’m not gonna say that I wouldn’t ever do something like that, but I can definitely tell you that right now my focus is on music and that’s all I want to work on you know. Being on a show that the format is like that, I don’t think it would be something that would be good for me. It’s an honor to be even talked about cause I think that’s funny and nice for people to even mention it cause you know, but.”

CY: Well, I’ll fill you in very quickly. There have been about 20 different series of this show and maybe two couples have lasted and most of them have broken up within months. It’s not real life dating.

CY: It’s reality TV dating. I guess the final question for you is what are your plans after this Idol’s tour?

CJ: “To do the same thing I was doing before just on a bigger level. I’m, if things work out really well and I think they’re going to, I’m gonna have the – a lot better resources to do what I love to do. So I’d like to make an album and pursue my career with all the bonuses that I’ve been given lately.”