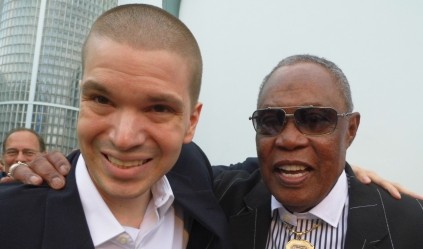 On March 11th, world renowned music star Phil Collins performed his first concert in years at The Fillmore Miami Beach. We were on hand to speak with Phil and his partner Orianne, on the red carpet [see CYInterviews here]. Soul music legend Sam Moore was one of the celebrities who came out to show his support for Mr. Collins. The two worked together.

Sam Moore is a Grammy Award winner and a member of the Rock & Roll Hall of Fame. He was also named by Rolling Stone Magazine as one of the 100 great vocalists of the rock music era. Known for being part of the music duo Sam & Dave, with Dave Prater, and as a solo performer, Mr. Moore’s most famous hit is Soul Man.

We had a chance to speak with Mr. Moore before the event, on the red carpet. You can read the highlights and listen to the entire CYInterview below:

On coming out to support Phil Collins for his first live performance in years, Sam Moore said this:

“This is his comeback I’ve been told and, you know, Phil and I have been friends for let’s just say, many moons. And to see him comeback and play, it’s an honor and a pleasure and before the night’s over, I hope we get together and sit down and look at each other, side each other’s head.”

Reflecting on what he thinks when he hears his 1967 hit, Soul Man, today, which was written by the late Isaac Hayes and David Porter, the 80 year old music legend said this:

“Tired, but it is what it is. You know, you can sing any song you want to sing, every time you look around, but you know at the end of the night, you gotta do the song. If not, people aren’t gonna leave.”

You can find more information about The Little Dreams Foundation clicking here.