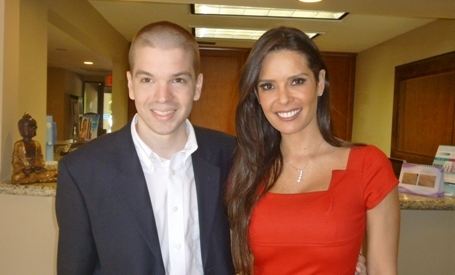 Greeting me in the front of her dental office with a hug, Dr. Karent Sierra’s hello was comforting, just like her waiting room. Generating that feeling is one of her main goals for those visiting her practice in Coral Gables. The dentist to the stars and star herself, as a member of The Real Housewives of Miami [RHOM], removed her white doctor’s coat yielding a sexy red dress. Wow! Visiting the dentist had never been like this before. If it had, I would have been going for daily visits.

On RHOM, Karent is the new kid on the block along with Lisa Hochstein, who we CYInterviewed at her home in Miami Beach recently [see here]. Both of these beautiful women joined the cast this year, for season two of the Miami housewives franchise.

Dr. Sierra is as confident and smart as she is charming and sweet. After our CYInterview, she showed me around her practice, whose walls are covered with photos of her celebrity patients and acquaintances. There’s Karent and Eva Longoria [see our CYInterview], David Foster and Pitbull, among others.

Karent is not just a dentist to the stars, if you can appropriately use the word “just” in that sentence. The good doctor has done commercial acting and appeared on televised Latin soap operas as well. A new trend for some scripted shows is seeing reality stars being cast. With her intelligence, good looks and theatrical chops, it would not be surprising to see Karent expand her show business presence.

For now, Karent Sierra will continue to engage viewers, along with her Housewives costars, while changing people’s lives for the better by improving their smiles in her dental practice. You can read the highlights or listen to the entire CYInterview with her below:

On joining the cast of The Real Housewives of Miami, Karent says people recognize her more now and that the recognition is gratifying:

“Walking the streets of Miami or any major city, people do stop, recognize me and it’s been actually very warm and inviting. I have created a fan base of people that love the way I’ve been portrayed or the way that I’ve handled myself in certain difficult situations shall we say on the show and it’s been very rewarding having such beautiful people come up to you and just give you warm compliments and just be very supportive of myself.”

With her new found fame on the Bravo show, Dr. Sierra says it’s brought new business to her practice:

“Interesting enough not to say hello but to make appointments. The last patient that I just saw previous to this interview was somebody that saw me on the show, was interested in meeting me and was interested in getting some veneers done because I did specialize in cosmetic porcelain veneers and I’m treating her right now.”

Many of the viewers of The Real Housewives of Miami have called her a confident person. Speaking about her confidence, Dr. Sierra said this:

“I consider myself a very confident woman. We all have things in our life that whether they’re tragedies, whether they’re, you know, uphill situations, but it’s the way you look at situations and how do you handle them. You know we all fall down, but it’s the way you pick yourself up that I think makes a strong woman or a strong man and a confident woman and I think my eternal optimism is something that definitely helps me. You know there’s situations in life that have arisen in which you feel that it’s the end of the world, but we can’t just drown and whither away. We need to learn to fight and whether there’s a problem, realize there’s a problem, but let’s find a solution. Let’s not focus on the problem.”

When it comes to her commercial acting work, Karent says she’s appeared in over 60 international commercials including being a spokesperson for Colgate. Reflecting on her work in show business, the dentist to the stars shares a great lesson about how fame can change people for the worse:

“It’s a wonderful industry because when I do the commercials it’s a one day shoot, we’re filming, it’s great and all, you feel like a star, you go back home, but then it’s back to reality and I think unfortunately a lot of people that have made it big in the acting industry they forget that you can be up on top, you know on the peak of the mountain one day and the next day you can’t, so it’s a matter of treating everyone the same you know and just being real to yourself and just because you’re recognized, just because you’re popular, just because now you become a quote unquote celebrity, doesn’t mean that you’re above anybody else.”

On what she’s learned from her costars on The Real Housewives of Miami, Karent says you can’t please everyone:

“That at the end of the day there’s gonna be people that will judge you, will like you or dislike you just because of the person that you are and once again if you’re true to yourself, you need to be ok with that. … So as long as you do no harm and you have the best of intentions for everyone, if someone decides that they want to feel that they don’t want to like you, I have to be ok with that and I think that’s part of it.”

Giving us a glimpse into her world as a cosmetic dentist, Dr. Sierra talks about some of her specialties:

“I specialize in a lot of extreme makeovers, which is basically doing someone’s patients full mouth, all 28 teeth in one sitting. We prepare all their teeth, they leave with temporaries and then we deliver their veneers two to three weeks later and the material of the porcelain that we’ve been using is so amazing that most of my patients, I mean if they were to smile at you, you would say, ‘What a beautiful smile they have.’ But you had no idea that they actually had porcelain veneers and that’s the idea is for them to have this beautiful natural smile that they’ve always longed for, they’ve always wished for, but whether it’s genetics, hereditary, you know or just financial reasons, they weren’t able to have that smile and I’m able to give that to some patients.”

The Bravo star believes she is changing people’s lives for the better, by helping her patients achieve a smile they can be proud of:

“Their emotional wellbeing exudes the moment that they feel that they look better, all of a sudden they’re happier people. So their self-esteem has been increased. They feel better about themselves. All of a sudden they’re either in new relationships or getting better jobs or making new friends and it’s so rewarding for patients to come up to me a couple of weeks after I’ve delivered their veneers and tell me, ‘Dr. Sierra, you changed my life.’ And I’m like, ‘Wow.’ It’s amazing that it’s not just a physical aspect but an emotional one as well.”

As the dentist to the stars with a celebrity patient list including Eva Longoria, Pitbull, David Foster and Jon Secada among others, Karent shares what she’s learned from these clients:

“You know what? I think the most enlightening moment is that these patients are just real people. That they’ve become celebrities and they’ve become you know well known throughout the world, doesn’t change their essence. I know that there could be some other celebrities out there that believe, you know, that they’re bigger than life, but you know for example Jon Secada is the most humble, down to earth person you’ve ever met, so is Pitbull. There’s all these people that you know may misjudge them to think that they’re celebrities and maybe not have every single moment of the day to answer their fans, but it’s not that they don’t want to. It’s just that they have extremely busy lives, but they are the nicest most down to earth people I think I’ve ever met.”

Three years ago, Karent Sierra founded a charity called Sharing Smiles, to provide dental work to children most in need. The doctor told us this about her foundation:

“It is a foundation in which we offer free dentistry to underprivileged children that normally would not have the financial resources to get their mouth treated and we all know the correlation between periodontal disease, which is gum disease and how it effects your stomach disease. It effects the valves of the heart, it can even affect having or causing shall we say, tremors in the body, seizures and so many other diseases that I think the public is not really aware of the correlation.”

You can check out Karent’s website and find all the information about her dentistry practice clicking here.

One Reply to “Gorgeous and Gifted: Brainy Beauty Dr. Karent Sierra Talks The Real Housewives of Miami, Dentistry, Acting and Giving Back”