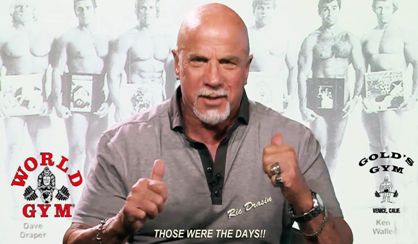 As a man of many talents, Ric Drasin always has something interesting to share. Whether you know him from the golden age of bodybuilding – back when he was Arnold Schwarzenegger’s training partner – his contributions to pro wrestling or his popular YouTube show Ric’s Corner, the former Mr. Venice Beach is always entertaining and informative.

The CYInterview regular is in the process of bringing his Ric’s Corner to China. He tells us about that and gives us his thoughts on both Alex Rodriguez and Lance Armstrong, on the performance enhancing drugs front.

Speaking about his plans to bring his popular YouTube show, Ric’s Corner, to China, Mr. Drasin shared this and gives us an update on what else has been going on in his life:

“With Ric’s Corner, I am taking it to another level now and I’m going into China with it, which I’m really happy about it because that’s a huge, huge jump for me to reach that community of all those people and bring American stuff to them. … I’ve always wanted to expand worldwide, I mean my show does air worldwide but it doesn’t go into China because they don’t have YouTube there. They don’t have a lot of American stuff. But because I have an audience that’s growing, I get a lot of offers from people around the world that want to do certain things with me. … Someone wants to do a book on my life, which I started in 2001 and I brought it up to about to 2010, but they want to continue it as a ghost writer, so I’m gonna work with them on that.”

Looking at the state of bodybuilding and fitness in America and reflecting on whether there is a Jack LaLane today, the golden age bodybuilder had this to offer:

“I feel that it had dropped down, the interest had dropped down, but I am changing my opinion on that because of the viewers that I have and the comments that I get, I think it’s really picked up. I just thought that bodybuilding was some 300 pound competitors nowadays had lost its appeal. But with my old school stuff that I put out there, there’s still a huge audience and appeal for that as well. And so I think that’s where the audience is. … I don’t think there is a today’s Jack LaLane. … I don’t know today if there is necessarily an exercise show like Jack LaLane. … But there’s no icon around, there’s only the people. If you give me another 15, 20 years at that age, maybe I can become that.”

“I think the punishment has to fit the crime. And I don’t see that as necessarily a serious crime. I mean everybody today in sports, not everybody, many of them, the majority of them all take some sort of steroid or enhancing drug that make them do better at what they do. And some get caught and some don’t. Once they get caught, they get spanked and they get fined and all this big stuff comes. … It’s blown out of proportion.”

Looking back on what happened to another famous athlete, Lance Armstrong, and his finally admitting to doping and subsequently being stripped of his seven Tour De France victories, Ric said this:

“I think that was blown out of proportion too. I mean, he did what he had to do. They want to make a statement to people, to the public that steroids are bad for you. … It’s not gonna stop anybody. It’s not gonna stop anybody at all. … It might even make more people want to take stuff because they can see they get better at what they do. So I can’t see punishing someone like that is the answer.”

It is always a pleasure speaking with Ric. You can visit his website, www.ricdrasin.com, to learn more about Ric’s Corner, his books and his other projects.