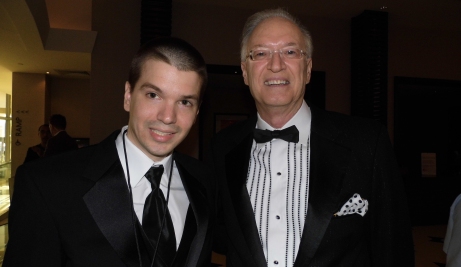 This past Saturday evening, Miami’s elite came out for The Blacks’ Annual Gala at the Fontainebleau hotel on Miami Beach. Stars walking the red carpet included everyone from Flo Rida to Taylor Hicks to Sammy Sosa to the cast of The Real Housewives of Miami. CYInterview was on hand, speaking with many of the evening’s celebrities. While there, we caught up with some of our past guests. Below, you will find photos with everyone we spoke with. Above is a photo photo with Miami attorney and past CYInterview guest Roy Black – with yours truly – to whose wife Lea is the driving force behind this important charity function. Roy, of course, supports Lea’s work in any way he can, insuring that the event bearing his name is successful.

Over the coming days, we will share with you our CYInterview red carpet interviews from the Gala. As for the evening itself, Lea and Roy put on a great event, which serves to benefit at risk youth through the Consequences Foundation.

The ballroom at the Fontainebleau, where the event was held, had over 60 tables with ten people to a table. Guests were treated to a menu that was a dazzling taste array, including salad with marinated heirloom tomatoes, lemon mozzarella pillow, torn basil and balsamic vinegar. The main course was a “Guinness” braised short rib of beef in smoked cheddar gratin with yukon gold puree and pickled root vegetables. The desert was a strawberry gateaux with mango strawberry gelee and coconut chantilly.

Taylor Hicks of American Idol fame, who is currently doing a run at the Paris Las Vegas Hotel and Casino, provided entertainment as guests enjoyed the evening’s cuisine. We will bring you our CYInterview with Taylor soon.

The auction portion of the evening hosted by Lea and Roy, which found Lea’s Real Housewives of Miami costar Lisa Hochstein assisting, included bidding on everything from a walk on role in the next Transformers movie to high end jewelry to exotic trips. Numerous people also raised their hands to donate $1000 or $2000 to the charity. That portion of the evening raised six figures for the Consequences Foundation.

The main talent for the evening was Miami’s own Flo Rida, who got many of the ladies up onstage during his set. People really enjoyed his performance of his hit Low. At one point, the rapper, who has reportedly sold over 60 million singles, went into the crowd and everyone seemed to be enjoying the interaction.

The evening ended with an entertaining spectacle of lights and sounds from the Wki5kers Rages with the Illbots during the nightclub and dance portion of the event.

A video crew from The Real Housewives of Miami was in the house taping for the upcoming season. Portions of the gala are likely to air on Bravo. During the evening, Lea Black said, “It’s the people that make the party.” She sure was right, as the crowd was terrific.

See all the photos from the evening below and keep logging onto CYInterview for more coverage of The Blacks’ Annual Gala.

4 Replies to “Glitterati Out for The Blacks’ Annual Black Gala, 19th Edition: CYInterview has Photos from the Big Event”