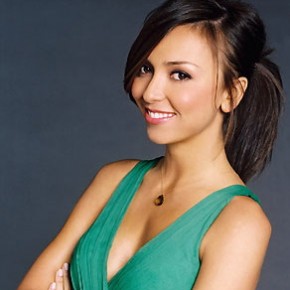 Giuliana Rancic’s life could be considered a Cinderella story. The 31-year-old Italian managing editor and anchor of Entertainment Channel’s E! News moved to America when she was six years old with her family. Living in a basement as her family worked for a better life for their children, she learned English, excelled in college, went to the top of the entertainment news world, and married prince charming in Bill Rancic, who was the winner of the first season of The Apprentice. She takes great pride in knowing she earned her way to the top in an honest fashion.

Listen to the Giuliana Rancic CYInterview:

Chris Yandek: How is married life?

Giuliana Rancic: “So far so good, we’ve been married three months now about and I gotta say it’s kind of unconventional. He lives in Chicago and I live in Los Angeles. Everyone asks us how’s marriage? And I say great! I think during the week we get to do our own thing. We get to run errands that we typically don’t like to run with each other. Like I go to the hair salon and he goes to the gym. Then we see each other every weekend so it’s pretty fantastic.”

CY: So it hasn’t changed your career in any way?

GR: “No. I think it’s probably made it a little easier in the sense that living in other cities I focus on work during the week cause I am sure one of the temptations is when you first get married you want to spend every second together. You’re dying to get out of work and get home to have dinner to your spouse, but we have none of that cause during the week we don’t live in the same city. I am always like hey, you have a junket or premiere you need me to go to? I am probably working more now than ever.”

CY: Bill as we know won the first season of The Apprentice. Would you ever consider taking the reality show plunge on a show like Dancing with the Stars for example?

GR: “No. I don’t think so. Something like The Apprentice I would be interested in. I think that would be a fun show to do. I know they’re doing a Celebrity Apprentice now. Something like Dancing with the Stars – maybe because I am not a good ballroom dancer. So that might have something to do with it. One of those I am not so sure about singing or dancing, but maybe The Apprentice. You definitely have to use your wits in that reality show.”

CY: Besides being an anchor for E! News, you’ve also been a managing editor since 2005. Since that time period the ratings have gone up. Do you feel vindicated in the sense that no one can say well she’s just another pretty face on TV?

GR: “You know it’s funny because a lot of people come up to me and say how did you get your job? Did you come to Hollywood and want to be an actress? How did it work? Well, actually I went to school for this. I studied journalism undergrad and graduate. It was what I always wanted to do and I worked my way up in Hollywood. That was a big battle getting the managing editor title. It was actually our CEO Ted Harbert. He had come in and he was new here and he was like, ‘Hey! Let’s make you the anchor.’ I said sure. That’s super, but can I also be managing editor? Cause I think a lot of the success of the show is not just who’s hosting it. It’s based on content. We were competing with all these entertainment shows, but we’re on cable so we’re never gonna get those numbers by doing the same stories as them. So instead of leading with Julia Roberts and Meryl Streep, let’s lead with Paris Hilton and Britney Spears and let’s target young Hollywood and that’s what we did. I think that’s why our numbers shot up.”

CY: Your family comes over from Italy when you’re six years old to Washington D.C. and you learn English by watching TV. Did you always believe in the American dream, or what do you think was the key to your success?

GR: “I was at an age when we moved here where we didn’t have money for a tutor or to go to private school or anything like that. I was forced into the public school system and no one spoke Italian. I basically had no contact with anyone all day. It was terrible. After school I would come home and watch TV and watching Sesame Street and the local news where they speak in short sentences and everyone has to be able to understand the news. They have to talk to every level of education.

I was able to learn English watching the news. I learned quicker than my sister and my brother. They’re five and seven years older than me. I picked up English quicker than they did. I definitely believe in it, especially when my parents came over and it really was the American dream. We lived in a basement and they worked their way up and got everything they desired. It was fantastic, but this is the only country you can do that in.”

CY: Being someone who is in his 20’s and had the chance to interview hundreds of celebrities like yourself and work with numerous mainstream media companies, would you say having a creative vision, having a strong work ethic, and being focused, besides making the right contacts are some of the most important things to being successful in TV and the entertainment industry?

GR: “Absolutely! I wasn’t conscious of this, but I never ever played that office politics game. I never tried to kind of cut corners or get up the ladder quickly by hurting other people or pushing other people aside. I just worked as hard as possibly I could work. Whether that got me noticed or not I didn’t care. I slept better knowing I did it the right way. I was the first one at work and the last one to leave. It’s like that and it is that work ethic. I got it from my father and my mother cause we had nothing when we moved here.

We worked for every single thing and that’s what I always did. I did get ahead by doing that and I think that’s the advice I always give to people coming in this industry, especially in this entertainment industry. So many people step on other people and hurt other people and you don’t have to do that to get noticed. If you work hard and you are talented at what you do you will get noticed and people will want you to work for them, move you up, and promote you.”

CY: With all the troubles Britney Spears, Lindsay Lohan, Nicole Ritchie, and Paris Hilton had this year, what do you think we’ll look back on and say that was the entertainment story of 2007?

GR: “I think as entertainment news is concerned it’s Britney Spears. To see this girl go from having everything to having nothing, including her mental health, it looks like she’s lost that too. It’s really tragic. It’s funny because the year started out poorly for Britney and with every shocking thing from the head shaving to slamming a car with an umbrella to driving, texting, and running red lights with her kids in the back seat with the pink wig, the crazy outfits, the crotch shots. Every time Britney made headlines we would say to ourselves ok, she can’t get crazier than this or it can’t get worse than this and it just keeps getting worse.

The year is still not over and it’s still weird. I was looking at pictures of her this morning with her pink wig on and her fingers are stained black from something. What is going on with Britney Spears? I think that was one of the bigger stories in entertainment this year, kind of the fall of Britney Spears.”

CY: We see Oprah Winfrey endorsing Barack Obama and Barbra Streisand endorsing Hillary Clinton. Have you decided yet whom you are for or are you still thinking about it?

GR: “I am really interested in seeing what effect Oprah has on Obama. If we look at Oprah’s history and track record, she certainly has a way of influencing people and it is pretty incredible. Whatever she touches turns to gold. It’s funny, this is the first time that I actually like quite a few of them. I can’t really decide whom I am going to back. In the past I feel like I don’t like anyone and tried to find someone to like. I like Hillary. I like Obama. I like a few people. I haven’t really made a decision quite yet.”

CY: Finally, what’s one thing we should know about you that we don’t or we’d be surprised to know?

GR: “Probably I like being behind the camera as much if not more than in front of the camera. I get the most joy out of what we do here from 6:00 AM to the time we shoot at 1:00 PM. I love the behind the scenes and what goes into getting these stories and these interviews. That’s what really gets me excited. I think in the future I’ll have a lot more producing than being on camera.”

You can catch Giuliana Rancic on E! News weeknights. Check your local listings. You can find more information at www.eoline.com.

You can check out everything Giuliana at her official website:
www.giulianadepandi.com

A special thanks to Ara Chekmayan of www.tacticalpr.com for engineering this interview while Chris was in a remote location.