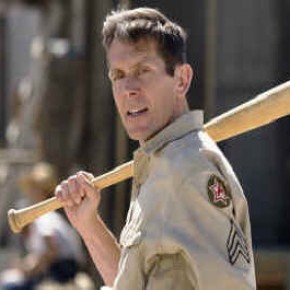 Much of history includes sports. American Pastime takes us back to World War 2 and inside a camp where Japanese Americans were held. Many movies have been made about the war away from America, but this piece stays in the country and shows us what one of these camps was really like. Actor Gary Cole plays a guard at the camp and in his spare time is a minor league baseball player who never achieves his dream.

Listen to the Gary Cole CYInterview:

Chris Yandek: American Pastime out on DVD May 22nd gives us a real look at one of the internment camps that held Japanese Americans during World War 2 in Abraham, Utah. How did you feel about the project?

Gary Cole: “I got the script shortly before they started to film last June. I thought it had so much. Baseball I am a huge fan of so that was given. This look at a period of history that is seldom looked at and not examined as thoroughly as it should’ve been or obviously was excluded from history textbooks for a long time in this country. I thought it was loaded, this script, with a lot of great things so I didn’t need much convincing.”

CY: Why do you think it took so long for this side of World War 2 to be portrayed with the American side in these prison camps, not really prison camps, but internment camps to be profiled?

GC: “Internment I think is a nice word for what you just said because it was a prison, even though it’s touched on in the movie where the director isn’t calling it a prison. What would you call something where there is a fence around a group of people that are herded into it and they aren’t able to leave? I think it’s something with the United States as people and a government wanted to bury and was for a long time because it wasn’t really documented or told in history like a lot of things that have changed in the people we have had in the country through slavery and the civil rights. It takes time for massive cultural changes to happen and to come to some other level of what’s acceptable. I think It’s just the question of that’s the way things move in a society. It’s not like it hasn’t been touched on. It’s been dealt with before. It certainly deserves more looks as well.”

CY: You play Billy Burrel who is a guard at the camp and a veteran minor league baseball player who never fully achieved his dreams. Is it hard for your character to accept things for what they are?

GC: “Well, I think baseball movies go together very well. I think that it’s something that keeps dreams alive. I think anybody who played baseball who dreamed of making it to the major leagues, this a situation in this period of time in history during World War 2 when guys that probably had no chance at all on either end, young players or players in the twilight of their career approaching almost middle age. All of a sudden the circumstances were different. There were a lot of free spaces in the major leagues because players at the peak of their game were leaving for the war. For my character, it keeps that dream alive even though it was probably never a reality in terms of what it amounted to be.”

CY: The Burrell and Nomura families both have gone through the same things with having sons in the war and it doesn’t matter what background you are. I think that’s what the movie shows, that we are all dealing with the same things even if our culture is somewhat different.

GC: “Right, I think there is a lot of parallels there. I think that’s the point of the script that Desmond, the writer and director was trying to get at. Here you’ve got two cultures, two ways of life, two ways of looking at things, but when you get right down to it human takes over. I think they both realize that they are not all that different from one another.”

CY: What has been the key to your longevity and getting so many different roles whether it is drama or comedy?

GC: “I think there is certainly luck and fate involved in any career of any kind. In show business, maybe it’s even more true. I guess it’s just being prepared to a certain extent along with a little luck and realizing that having some kind of range is significant to me. It can make your career last longer I think. There is many different paths of a career. I bounce around and do a lot of different things. It suited me that hopefully I am prepared to do different kinds of styles, genres, or whatever you want to call it.”

CY: Was Office Space enjoyed by so many people because so many could relate to it?

GC: “Yeah. Oh definitely. I think Office Space pushed the button on a culture. I don’t know if it had a movie specifically designed for it before, more of a modern age look at office culture, communication, the world of memos, cubicles, and all of that. Kind of took me by surprise because I had never spent any time in that culture. I had plenty of other jobs before I was an actor, but they were all service jobs and labor jobs. First of all, I couldn’t even type a word. I wouldn’t be much good in an office to start with, but every character in there is identifiable. That’s the skill of Mike Judge who is able to create characters that people instantly recognize.”

CY: You played Will Ferrell’s father Reese Bobby in Talladega Nights: The Ballad of Ricky Bobby. Was it fun going to the set every day for this movie?

GC: “Yes. More fun than you should be allowed to have. I was a huge fan of Will since Saturday Night Live and all of his work after that. No matter what he is doing, no matter what movie it is, there seems to be some kind of surprise in him. He’s genuinely a likeable guy on screen and off and he’s got a real map of the big picture too because Will co-wrote this movie. He’s produced several of his movies so he spends time putting all of the elements together. When you are on board with him you are in pretty good hands.”

CY: Many children are diagnosed with autism every day. Your daughter Mary was diagnosed very young and is now a teenager. How has she come along?

GC: “She’s doing great. She’s just finishing up the 7th grade. Our experience has been very good. We still face issues from time to time with comprehension. Becoming a teenager is complicated anyway. All in all she has come so far. We are just so proud of her.”

CY: What can you say to fellow parents today that have a child with autism?

GC: “Well, to begin with, if they suspect autism and have children or very young children don’t delay getting it checked out. Get a diagnosis. Get them in front of any specialist, any qualified doctor, and if they can’t diagnose them if they’re not sure keep checking it out until you find out something definitive because if there is an issue with autism or any kind of learning disability, the earlier it’s detected the better off you are. Then you can start any treatment or intervention that you need and that will make a big difference.”

CY: Finally, you are part of this new upcoming HBO series titled 12 Miles of Bad Road. Tell me about this project.

GC: “12 Miles of Bad Road is written by Linda Bloodworth who created Designing Women and Evening Shade. This is set in the South in Texas and it is Lily Tomlin as the matriarch of a very rich and over privileged family who own a huge real estate company and their less than respectable and mature behavior is on to display. It is probably not going to hit HBO till next year some time.”