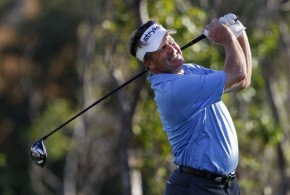 For many golfers, winning the US Open is a career moment. For a certain few, getting to play in the US Open in their hometown is a once in a lifetime opportunity. Fred Funk got to Congressional Country Club this week the hard way. The former PGA Tour and now Champions Tour golfer was one of ten people out of 112 to earn a spot via a US Open qualifier. This is not the first time Funk has qualified to get into the tournament’s field.

In this CYInterview, Fred Funk says it does make it more special to qualify and earn your way into the US Open field, in the same way people might recall Kevin Costner’s character in the movie Tin Cup qualifying to play in the tournament.

“It does give you a special feeling I guess cause you gotta go through the rigors of 36 holes of qualifying one day and just putting up with, for me it was 112 guys for 10 spots. You gotta play well and you kinda know what you need to shoot. You just gotta go out there and do it. It’s all or nothing. But this year was a little more pressure for numerous reasons. But number one reason probably is at my age, I’ll never have a chance to probably play in my hometown again in D.C. and at Congressional as a US Open participant because the last time it was a 14 year rotation. 97 I think was the last time they played there. So if they go, I’ll be 70 next time they come around. So this is a big deal to me.”

With the celebration of his 55th birthday today, Fred Funk has been going through a slump of bad tournaments in the last six to seven months. Besides the special feeling he’ll have of playing in his hometown, Funk realizes, perhaps, that good things are around the corner, having found his way to arguably the toughest tournament of the year, at the Congressional Country Club.

“I’ll be 55. I’m always, my birthday always falls on US Open week. I’ll be 55 on Tuesday. It’s pretty special to do that. The other reason I think it meant so much to me this year is I haven’t been playing that well, not up to my normal standards for probably the last six to seven months or so. So it meant a lot to me to put my game together that day and grab one of the spots.”

Besides being this week’s hometown guy, Funk’s ties to Congressional Country Club go way back to his first ever event on the PGA Tour. He qualified to play in the Kemper Open that was held at Congressional. For Fred, this is already a special week. And that’s before even getting out there on the first tee.

“My first tour event ever was at Congressional when they had the old Kemper Open. I played in my first professional tournament on the tour. I wasn’t a tour member. I qualified that year to a local qualifying and that was the first time I played in a tour event so that was very special. I played a couple US Opens there and it’s always a special feeling. Congressional’s a very special place. It’s one venue that I think a lot of people that I would say the majority of guys that play golf for a living would look at that venue as one of the best ones that’s out there. It has a lot of history. It has a special feeling, a special aura around it that is unique to most golf courses.”

Enlightening us as to the challenges every golfer will be dealing with this week at the Congressional Country Club, Funk gives us a preview of the US Open course:

“Any time you have a USGA setup, US Open, they try to make even par be or something close to even par be the winning number and I actually think over par might win this one because they’ve added extreme length, they’ve added a lot of new tees, they can play it at almost 7600 yards if they want to. It’s a very hilly golf course. It’s very narrow fairways, very thick rough, very difficult greens to put with. There’s really no aspect of the golf course that’s very easy. You just can’t put the world easy and describe Congressional in any way shape or form because it’s a brutal test and they make it very brutal. The guy who wins the US Open next week is just gonna be really tired at the end of it.”

When Tom Watson at the age of 59 came within a putt of winning the 2009 Open Championship, the golf world was inspired by a man almost 60 competing with guys not even half his age. As part of the over 50 group, Funk sees himself as one of those who wants to inspire people to believe you can play golf at any age, as long as you’re healthy. The only drawback he says is the younger guys are hitting it longer with the new technological advances in golf equipment out there.

“I like to be one of them that can inspire as well. I was one that actually played my best golf from age 45, 46 through on the regular tour until I was 50…I think if you’re healthy, the game of golf really doesn’t know how old you are. If you’re healthy you’re still able to play. The biggest difference, biggest drawback with today’s modern game and how far the young guys are hitting it because of the golf ball and the equipment, that’s putting us at a disadvantage.”

Looking ahead to the US Open, I asked Fred to reflect upon what it would mean to be near the top of the leader board on Sunday at the US Open. He says he took a driving tour of the course last week to analyze what he and fellow golfers were in for.

“That would be huge that where I am in my career and how that golf course is going to play, I drove around it on Tuesday and saw the changes they made. It’s gonna play, extremely, extremely long and difficult and for me to get into that position I better be playing really good. Not that I can’t do it, but that would be one of the most special feelings for me in my career if I could pull that one off. It be very special.”

In 2005, Fred Funk became the oldest golfer to ever win the Players Championship. Many in the golf community call it the fifth major. He says it’s his greatest individual accomplishment. In 2009, Funk won the US Senior Open. In 2007, the Champions Tour golfer became only one of a few men in the last 30 years to win a PGA Tour event over 50, at the Mayakoba Golf Classic. Fred says he wants to win another PGA event.

“Probably individually would be the Players Championship, making the Ryder Cup team is right there with it. Making the two Presidents Cup teams, playing for your country, representing your country was huge…I gotta say the Players is by far my biggest win. The US Senior Open was very big as well, but representing my country, I never really dreamed I’d make a Ryder Cup team so that was pretty special there…That was neat too [winning the Mayakoba Golf Classic] but that kind of falls, I’d like to do it again. I still feel like I could if I’m hitting on all cylinders, I can still get myself in contention to win on a regular tour. I think a lot guys out here on the senior/Champion’s Tour feel the same way. I would love to pull that one off.”

There’s a legendary story about a skins game involving Fred Funk and one of the greatest women golfers ever, Anika Sorenstam. Fred made a bet that if Anika could outdrive him, he would put on a pink skirt. Whatever you might think about a man donning a skirt, Fred says it was one of the greatest moments of his career. Funk noted it’s the one thing he hears about from people, more than anything else.

“Well, I set myself up for that one. I asked her whether I could put on a skirt. It was kind of my idea if I lost the bet. She didn’t have anything to lose. It wasn’t like if I had outdrove her all day long she had to do something. Yeah. It was neat. It ended being one of the greatest moments of my career because it was on national television, it was a real lighthearted fun thing. I probably hear more about me putting on that skirt than anything I’ve ever done. So that turned out to be one of the best moments of my golf career believe it or not.

Funk’s most loyal fans are called Funk’s Punks. He says it was a group of neighbors that started it. Today, it has become an organization that works with numerous charities.

“It’s a group of neighbors of mine at home that started it. They’ve become a really big group. They’ve become a big charitable organization. They raised a lot of money for different charities, mainly Wounded Warriors now and a kid that we helped build a house for that got paralyzed in a football injury we’ve been helping out ever since, but they’re a great group.”

Finally, Fred lists a few golfers who he believes could win the US Open this week and will play great:

“I think a guy like a Luke Donald or Matt Kuchar will play extremely well. They keep the ball in play. They’re great putters, real precision type golfers. I don’t think an over powering guy is gonna do as well. Not that there’s any substitute for length, but if you’re not hitting fairways and hitting it in the short grass, you’re not gonna have a chance.”

Photo credit is to the PGA Tour.

2 Replies to “Fred Funk – No Longer in One – This US Open Pro’s Still Playing to be the Best: Gives Golden Golf Insights to CYInterview”