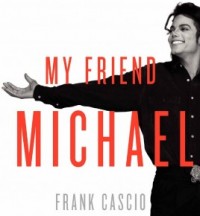 Frank Cascio claims a friendship with Michael Jackson that most fans could only have dreamt of. In his recently published book, My Friend Michael: An Ordinary Friendship with an Extraordinary Man, Frank sheds light on facets of Michael’s personality most people probably did not even know existed. He shows Michael as an everyday, flawed human being, while at the same time being one of the greatest entertainers of the last 100 years.

In our ongoing coverage of all things Michael Jackson, including speaking with his sister La Toya Jackson [see here] and [here], former choreographer for the This Is It Tour Travis Payne [see here] and our one hour interview remembering Michael in 2009 with former Sony executives Cory Rooney and Chris Apostle [see here], our CYInterview with Mr. Cascio covers MJ’s life on a day to day basis, over a period of years.

You can listen to the entire CYInterview below or read the highlights:

Frank Casci believes he was one of the few who truly knew who Michael Jackson was. Frank met Michael as a young child through his father Dominic who was an employee at a hotel Michael visited on different occasions. Because Michael formed a friendship with Frank’s father, Frank got to spend a lot of time with the gloved one and would later go from being a friend to a working employee for Michael and dealing with many different business aspects of MJ’s career.

“I think I’m one of the few who actually knew this man and got to see so many different sides of him over a long period of time and you know, I’ve been blessed because Michael doesn’t bring many people into his life, especially for that long period of a time…If it wasn’t for my father being the person who he was, this would have never even been possible. It could have been anyone, but Michael took an affection to my father.”

Frank tells a story of one of his early experiences with Michael, recounted in My Friend Michael, about Madonna inviting the king of pop back to her hotel room. Cascio gives his thoughts on the story:

“Girls would throw themselves at Michael. But yeah, Madonna, that’s right, wanted to seduce, tried to seduce Michael and I remember Michael telling us that story. He admitted he was so shy with her because she was overly aggressive and Michael’s a very sensitive man.”

Frank shows a personal side of Michael, sharing stories about him kissing and dating numerous women. He agreed that Michael’s attraction to women was something that generally wasn’t focused on.

“It was downplayed. And I’ll tell you, Michael was private about that part of his life. Michael was attracted to women. He had a very particular type and it’s funny because people wouldn’t think it, but it’s a simpleton. He was dating this girl who he really cared about and you know and she cared about him and it was great to see, but it was also kept very private because Michael did not want to, you know, expose this girl and have the media from the outside ruin a relationship that he really was enjoying and you know, he likes slender, tall, simpletons, sweet, humble, soft-spoken girls. And I’m really happy that Michael actually found that in his life later on.”

As a minor, Frank Cascio traveled the world with Michael Jackson – with his parents’ consent – and saw many his of live performances around the world. Frank says Michael is not a pedophile and didn’t have any physical attraction to young children. He says those comments are hurtful:

“Michael has never ever once ever invited a child to stay in his room, sleep in his bed. Michael’s never invited a child to stay in his room. You know, it’s different. You want to stay with him. You wanted. It’s like hanging with your buddy. It’s like having a slumber party. And Michael was a child at heart. There was nothing sexual about Michael. He had no attraction to young children. It’s just disgusting. I’m so hurtful [sic] by those misconceptions, that in particular. Michael loves children for their innocence and their purity and that was his inspiration. It just hurts me because Michael is not a pedophile and has been falsely accused and that’s hurt him.”

Regarding Michael, Mr. Cascio does get into some stories about Michael Jackson’s use of prescription drugs. For a period of time, Frank states he was monitoring Michael’s prescription drug intake. He also believes there were doctors who took advantage of him. Cascio also speaks of Michael’s chronic back pain.

“I was concerned when I saw some doctors come in, give him medicine and how he would react to it and his state of mind. And you know, for a period of time, it was something that I was concerned about. He was also going through many, many things. He had back issues. He had, who’s trying to take money from him here. Who’s trying to accuse him of this on this end? Who’s trying to, you know, friends just let him down and go sell him out.

He had all these different factors coming in and what was going on. Yes, I was concerned and Michael resorted to some medicines more than I personally think he should of, but I’m not a doctor…I also believe that Michael was also manipulated by many doctors and was taken advantage of that because they saw him as a money pit… It was bad. He had constant back pain for years…After all these years, it [performing] just took a tool on his body and that’s where the chronic pain came from…Nobody can understand it, but your body takes a beating, it takes abuse and Michael’s body was abused after all these years of working, working, dancing, dancing, dancing and it took a toll on him and it caught up with him.”

Frank agreed that it’s hard for people to accept that Michael Jackson was just another human being, who dealt with issues and troubles like everyone else:

“I think it is because you would never know; because every time Michael was performing, or in front of you, you never saw that side of, you only saw the professionalist. You only saw the genius. You saw the brilliance. You saw someone very, very special and unique. And even, and I can’t say when the cameras were off or he’s on stage he wasn’t you know, special and unique, but he was, but there’s also a human side of him that he didn’t want, you know, some people to see immediately. Later in life he wanted everyone to see the human side of his stuff, to understand. Michael wasn’t very good at communicating and explaining himself to people. “

When it comes to some people believing Dr. Conrad Murray was the fall guy in the death of Michael Jackson, Mr. Cascio states that he believes Dr. Murray is the only person who was responsible for Michael’s death.

“Dr. Murray was the ignorant doctor, selfish, manipulated Michael, portrayed himself to be a doctor that he wasn’t. And out of negligence, ignorance and selfishness, we lost Michael Jackson because of Dr. Murray.”

In a story published, not that long ago, about Marlin Brando, Elizabeth Taylor and Michael Jackson driving across country together and ending up in Ohio after 9/11, Cascio says that story is completely inaccurate. He tells me that Michael was with his family in New Jersey after the events of September 11th, 2011.

There is a quote on page 96 of Cascio’s book claiming the gloved one said to Frank, “All you have to do is study these pictures and these words. Look in the mirror and tell yourself what you want to happen. Do that every day and it will happen.” Frank elaborates on that:

“The key to his success first was in the form of do everything from a place of love and do everything that you do the best. And before The Secret and all these documentaries and books coming out, Michael understood the secret way before The Secret. Michael understood being connected with God, the universe, whatever you may want to call it and believing in yourself and it all comes from within.”

You can find more information and purchase a copy of Frank Cascio’s book My Friend Michael here.

One Reply to “Frank Cascio’s Ordinary Relationship With the Extraordinary Michael Jackson: Love, Believing and Making Things Happen; Tales of the Man in the Mirror in the book, My Friend Michael: An Ordinary Friendship with an Extraordinary Man”