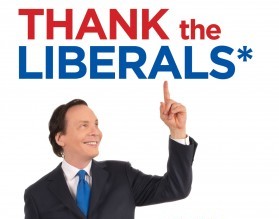 As, arguably, the leading liberal voice on Fox News’s media platforms, Alan Colmes is probably best known as one half of Fox News TV’s Hannity & Colmes, which ended in 2009 after an over 12 year run. Subsequently, Alan moved to the Fox News Radio Network to host a daily program. He still appears frequently on Fox News TV shows, including The O’Reilly Factor, hosted by Bill O’Reilly.

Mr. Colmes has a new book out titled, Thank The Liberals For Saving America (And Why You Should). He was kind enough to join us recently for a CYInterview, in order to discuss his book in addition to a variety of political topics. Featured columnist Jay Bildstein joined me for this conversation. Jay and Alan did some spirited debating that makes for must listening.

Listen to the Alan Colmes CYInterview:

One of Alan’s messages, in his book, is that conservatives change their views on an issue when it impacts them personally. For example, former vice president Dick Cheney has a daughter who is a lesbian. Though Mr. Cheney is a conservative, he supports same sex marriage which is something many Republicans do not support because they believe marriage should be between a man and a woman (Jay pointed out that this type of behavior is not particular to conservatives.):

“Actual life experience changes your views very often when you’re confronted with some of the real issues that we talk about ideologically, which is why Dick Cheney, who’s more progressive on gay marriage than Barack Obama because he had a gay daughter, who would’ve thought that. When Dan Quayle was on Larry King years ago when he was running for vice president, Larry King said to him, ‘What would you do if your daughter needed an abortion?’ And the answer was, well I’d support whatever decision she would make. And the right went crazy. Here was supposed to be an anti-abortion ticket. He gave a human answer of any father who would love their child and accept them.”

When it comes to fiscal responsibility and dealing with elicit drug use in America, Alan cites Libertarian presidential candidate Gary Johnson on how, the former Governor of New Mexico dealt with these issues. See Gary Johnson’s two CYInterviews with us [here] and [here].

“With Gary Johnson, he did a cost benefit analysis and just purely from an economic standpoint, incarcerating people and having the so called war on drugs, which has never been successful, costs more money. If you’re a fiscal conservative, you would want to do what meets the cost benefit analysis and treatment is a much more sane way, economically, to go about dealing with the drug issue than just running after people and locking them up. So a true conservative, I would think, and certainly a fiscal conservative, would look at it that way.”

When it comes to being a voice for liberals on Fox News’s media platforms, Colmes says some liberals will not give him the time of day because he works for News Corporation:

“I get criticized because I work for Fox News. If I were really a good liberal I wouldn’t be taking Rupert Murdoch’s money. But am I a bad liberal because I happen to speak sometimes to a conservative audience. You know, I mean, there are liberals who won’t give me the time of day because they don’t like who my employer is.”

Alan says many progressives are unhappy about a variety of President Obama’s policies and that the president is far from being the socialist many conservatives claim he is:

“This notion that President Obama is some wild eyed, leftist, Marxist socialist who is taking us down the road of leftism is ridiculous because he’s certainly not governing as, he’s really governing as a centrist and has many progressives upset that he hasn’t been more aggressive and progressive on a variety of issues. I think he’s really done quite well in general, but certainly a lot of progressives don’t feel he is as progressive as the right would like to paint him.”

On the front cover of the Fox News Radio host’s book Thank the Liberals for Saving America, Alan has an endorsement from former President Bill Clinton. He states what today’s politicians can learn from Mr. Clinton:

“How to, number one, be likable, how to be relatable to the average person and how to work with the other political party when necessary, and don’t forget he’s the guy who triangulated, he’s the guy who ended welfare as we know it and he’s able to do it with a very hostile Congress that impeached him. So he certainly has, he’s a great politician and he knows how to work with all sides.”

When I asked Alan a wildcard, pop-culture question about whether or not he would be willing to appear on Dancing with the Stars, like other media personalities including: Tucker Carlson, Ricki Lake, Jerry Springer, Leeza Gibbons and past CYInterview subject Kenny Mayne [see here], the pundit says he will never appear on that show:

“No. Number one I’m not a star. Number two I don’t dance. The only word that fits in that whole sentence is ‘with.’ So I don’t think I’d be appropriate for that show.”

You can check out Alan’s official website at www.alan.com