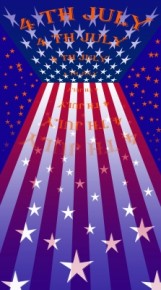 There is every reason to be positive this Fourth of July. And not because things will magically be getting better for the United States of America in the very near future. Oh sure, some good news might pop up here and there. But in general, the U.S. faces big challenges.

Tell you what though. America faced big challenges back in 1776. There were challenges in 1812. The Civil War brought with it enormous challenges. There was World War I, The Great Depression, World War II; I could go on and on.

We have a choice. We can waste away our time with empty entertainment – something like, oh I don’t know, watching a reality show about people who eat too much cabbage and beans and the windy times that ensue – or we can pay attention to the nation’s challenges and come up with ways in which they can be surmounted. Even if our first impulse is thinking, “How can little ole me help make big changes?”

We can get drunk on false optimism and figure that any challenge can be overcome by wishing it so. Hey, can’t we just pay three convenient payments of $29.95 to receive the ultra easy how-to-overcome-any-challenge-no-matter-how-tough, no work necessary, super solution pack? Nah, I think they stopped selling that back in the 80s.

The sober, somber, serious reality is that now is the time for regular folks to wake up and insure that America’s future is bright. Just keep in mind that in World War II it was the actions of millions of regular folks that led to victory over evil. Ordinary people can do extraordinary things when they must or simply when they choose to.

July Fourth is a celebration of individuals with dreams coming together for the sake of a goal held in common. Life, liberty and happiness are not merely concepts to be reviewed when studying the history of the nation. They are goals to aspire to for each and every one of us.

In the United States, the right to vote and the right to freedom of expression serve to insure that people can speak out, irrespective of social or economic status and work to elect individuals who will help make the 21st century as filled with progress for America as centuries past.

Is this an easy process? No! Is this a worthwhile process? Yes? Can challenges be surmounted? Go ask the Founding Fathers. Happy Fourth of July! Remember, speak up and vote!