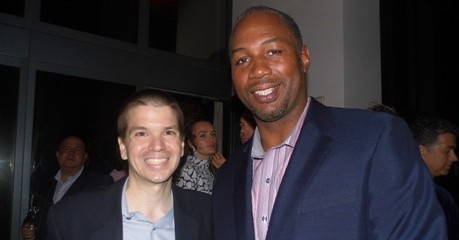 In 2004, Lennox Lewis retired from boxing as the undisputed Heavyweight Champion of the World. With a record of 41 wins, 2 losses and 1 draw, Lewis has one of the greatest resumes in the history of boxing’s heavyweight ranks.

Today, the pugilist lives in Miami Beach, Florida with his family. Last week during Art Basel at the IWC Schaffhausen watch event on South Beach, we had a chance to speak with the former champ about what he is up to today, as well as getting his thoughts on the state of boxing.

On what is new in his life, Lennox Lewis told us this:

“Everything is new. I mean, I take every day as it comes. But you know, I’m continually working on my brand, working on my charity, Lennox Lewis charity and helping young people. There’s a couple of boxers out there, young boxers that want my help tutelaging. So they show up every Monday at my house. So I train them and, you know, world traveling, business opportunities, I put on my business hat now, took off the fighting gloves you could say and, you know, every day is a new development.”

Giving his thoughts on the state of boxing, the former undisputed Heavyweight Champion of the World said this:

If they were competing in boxing at the same time and in the same weight class, Lennox agrees he could have taken Floyd Mayweather Jr. in his prime:

“Absolutely, I mean, and I would definitely go put him in a small ring and hit him to the body and slow him down.”

You can check out Lennox Lewis’s official website here.