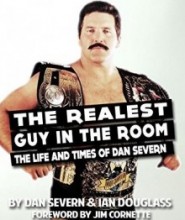 Over the last year on CYInterview, we’ve had the opportunity to speak, on a number of occasions, with one of the greats of MMA, amateur wrestling and professional wrestling. He is none other than Dan “The Beast” Severn. The former UFC Champion and NWA World Champion is back with us to talk about his upcoming MMA/Kickboxing event in Auburn, Indiana on May 5th.

If you cannot attend the live event, you can watch Dan Severn’s Danger Zone MMA event online for $10. You can find more information about the upcoming Cinco De Mayhem event at www.facebook.com/dangerzonemma.

In our latest chat with Dan, we talk about the event, as well as why he loves teaching and sharing his athletic knowledge. He shares with us that he has a few guys he is training that he thinks will fight for a major MMA promotion one day. Focusing on his professional wrestling career, he also tells us about some of his opponents in the ring.

On May 5th in Auburn, Indiana, come out and witness Dan Severn’s Danger Zone MMA. The address is National Military History Center 5634 County Road 11A, Auburn, Indiana 46706. You can find more information here and by calling 260-927-9144.

One Reply to “Former UFC Champion/NWA World Champion Dan Severn Back to Discuss His Upcoming May 5th MMA/Kickboxing Event, More”