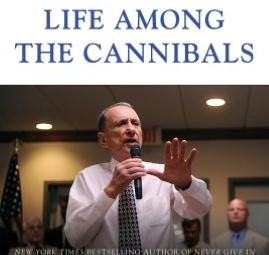 In his latest book titled Life Among the Cannibals, former United States Senator Arlen Specter stresses the lack of moderates and centrists in both the Senate and the Congress as a whole. Mr. Specter is the longest serving senator in Pennsylvania’s history. He served five terms. His career came to an end after losing a primary in 2010.

In recent months, mainstream media outlets have discussed the state of the Senate, particularly its seeming lack of getting much accomplished. Members of Congress have seemed to forget the art of compromise. With this in mind, and with his new book out, we are pleased to have had the opportunity to speak with former Senator Specter. During this CYInterview, featured columnist Jay Bildstein continued to put forward his solutions to change the environment in Congress:

Below you can read the entire transcript or listen to the entire CYInterview:

Chris Yandek: Senator, thank you so much for joining us today. We really, greatly appreciate it and I want to get right into it with you and say you know, looking at one of the biggest messages of the book, you talk about the lack of centrists, the lack of moderates, the lack of people in Washington willing to meet in the middle. The question I have for you as you very well know, Maine’s Olympia Snowe has recently retired because she can’t deal with not being able to be a moderate. How are we ever going to get anything accomplished in Congress? How are we ever gonna get anything accomplished in the Senate if we can’t have people meet in the middle, if we can’t have people compromising?

Arlen Specter: “The perspective answer has been supplied by what happened to Senator Murkowski in Alaska. We’ve had a situation where the extremes have taken control of both parties where you have a strong senator like Bob Bennett in Utah with a 93 percent conservative rating, can’t win a Republican primary because of a single vote. Similarly you have an outstanding senator like Joe Lieberman from Connecticut who can’t win a Democratic primary.

Well, with Senator Lisa Murkowski, she was opposed in a primary by a Tea Party candidate, she was defeated, but she came back to win a write in. And you know how hard it is to write in Murkowski. If you put a y instead of an I, your ballot’s thrown out. But that showed and she won the primary statewide, virtually unprecedented move in American political history. It shows that if you acquaint the people with the nature of the problem and motivate them, but you can get the center out to put a moderate in government. I think that could be a microcosm of what could be done in this 2012 election.”

CY: Well, I know that Jay is gonna want to talk with you about the center and he’ll have some ideas for you that we’ve been talking about with so many high profile people in politics, so Jay why don’t you go ahead.

Jay Bildstein: Well, Senator Specter first of all, thank you for being with us here today. It’s an honor to be speaking with you. To follow up on what Chris said, you know, you make this point and I really take to mean that for our nation to be led well it’s gotta be led from the center, certainly not from the far left, certainly not from the far right. But for a nation to be led well we need leaders and to me, and I think to many Americans, to be a leader means to lead by example.

Now in our current economic climate, where meaningful adjustments are gonna have to be made to insure the financial well being of the nation, I’ve put forward and I’ve spoken to this to a number of people. One of the last folks we just spoke to is somebody who I regard very highly, former U.S. Comptroller General David Walker and I put forward a three point fiscal leadership plan which consists of the following: One, the Congress, president and vice president need to take a 50 percent pay cut in salaries because after all currently, we’re practically borrowing half the money, which is being paid to them and which is using to go to fund most of the programs of the nation and they have to give up their rich after office benefits. Two, we need a lifetime embargo on lobbying. And three, there need to be term limits. I wonder what your thoughts on that type of plan are?

AS: “Well, I think that if you cut the president’s salary by 50 percent it would be symbolic, but it wouldn’t save you a lot of money. When you talk about lobbying, I think there you do put your finger on it, on an important nerve where there is too much influence by the lobbyists, too much political fundraising, too much bundling and really too much influence. Of course that’s only a fraction of the problem which you have in larger measure by the decision in Citizen’s United where now the Supreme Court is allowing corporations and unions to make unlimited and anonymous expenditures.

When you get to the subject of term limits, there I’m hesitant. You got a very tough ingrained bureaucracy. I served as Chairman of the Intelligence Committee. Let me tell you, it’s tough to find out what the CIA is doing. They led us astray on the weapons of mass destruction that they said Saddam Hussein found. We sent out Collin Powell, Secretary of State, former National Security Counselor, chief of staff, four star general, couldn’t find it out. I’d be reluctant to cut into term limits. I think if the voters would become informed and aroused, they could impose the proper limits on the guys who ought to be out, guys and gals.”

JB: Senator, do you think that there’s a reason that some, not all, but that some people in Congress have, at least it seems to me, a lot of people we’ve spoken to kind of act in a way that is not kind of congruent with what the average American is dealing with. I mean, I read all the time, all these different kind of fiscal plans looking to solve the financial and economic ills of the United States of America.

Don’t you think we should be in a nation where the people who lead us and have to make the tough fiscal decisions, if they ask the every man or the every woman, “Hey! Pull your belt in two notches,” shouldn’t they be willing to pull their belt in four notches to kind of say, “Look” – like a good leader in a battle, like a good platoon sergeant – “Look, guys. I’m in front of you. I’m not behind you saying take that hill. I’m in front of you saying follow me,”?

Shouldn’t we at least work to do something in Congress, where American people – David Walker said we’re gonna have to renegotiate the social insurance contract of America; I think he knows what he’s talking about – don’t you think we’re gonna have to ask our leaders somehow to do a bit more than they ask of the general public to kind of raise morale and say, “It’s not Washington hypocrisy,”?

AS: “Yeah. But what I would ask the leaders to do is to better understand the American people. I would insist that the leaders have town meetings and meet the people and listen to them and find out what is on their minds. I made it a point in 30 years to cover virtually every county, virtually every year. When I turned up for my town meetings in 2009 when the Tea Party rebellion is starting to swell, had a very famous town meeting, 1200 people, stormed of the Bastille, shaking their fists in my face.

I’d make – before I’d elect somebody – I’d make him do town meetings and face the people and then I would insist that the person not run on a platform of no compromising. The meaningful thing that the leaders could do would be to be dedicated to a discussion across the isle, to vote their consciences and not to follow the strict party line. I think that would lead to sensible decisions. I would seek leadership on those really meaningful ways. Make those demands and make them stick or vote them out.”

AS: “Well, we have people there who do have substantial wisdom and substantial experience. And if they were confident enough to express their own views, that they wouldn’t be bushwhacked by the party for casting a single vote like Bob Bennett was or like I was, they’d be willing to speak up and they’d be willing to speak their consciences and put their ideas on the line. But right now, there is timidity, there is fear that if they do that a single votes gonna cost them their job and they’re not willing to make that kind of a sacrifice and they’re not enough with the people. How many members of Congress go face the people in a town meeting and are prepared to answer questions from the floor. That to me is the real litmus test.”

CY: I think I agree with you, what you’re saying is that, but people at the same time need to hold their public officials accountable. But what I say to you is when I look at that scenario, you know if you’re in Washington and you’re concerned about one vote that’s possibly gonna get you voted out, you’re really not being a public official. A public official is someone who goes to Washington to benefit the public and that means that they’re not worried about being a career politician.

And the problem we have with Washington right now Senator is we’ve got too many career politicians. We’ve got too many people who are concerned only about you know, continuing to have this public official job that they think is supposed to be a long term career from the private sector and that’s just not the case.

AS: “Well, you and I agree. I think a public official ought to follow his conscience as to what is in the public interest, not what will protect his job. Listen, great talking to you, but I gotta move on.”

CY: Well, thank you very much for your time senator. We greatly appreciate it.

JB: Thank you senator. Thank you very much. Have a very nice day.

AS: “Good talking. Thank you.”

You can purchase a copy and find out more information about Alren Specter’s book Life Among The Cannibals: A Political Career, a Tea Party Uprising, and the End of Governing As We Know It here

3 Replies to “Former U.S. Senator Arlen Specter on Congress, Compromise and Coming from the Center: Answers Questions on Congressional Pay Cuts, Eliminating Lobbying, Term Limits and What it Means to Be a Public Official”