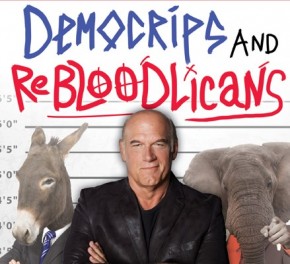 CYInterview began focusing on politics – along with entertainment, sports, books, pop culture, etc. – four years ago when we spoke with former Minnesota Governor Jesse Ventura. Today, in our fourth go round with him, the independent minded former pro wrestler takes on the two party duopoly, discussing his latest book titled, Democrips and Rebloodicans: No More Gangs in Government.

You can listen to the entire 50 plus minute CYInterview below. Featured columnist Jay Bildstein joins me for a conversation you do not want to miss:

“Absolutely. If Ron Paul’s out of it after the Republican Convention, if Congressman Paul goes home and retires and doesn’t leave the Republican Party and even if he does, I will still support Governor Johnson. He, I will tell you this, the Libertarians got a hold of me in Mexico and wanted to know if I wanted to run with him. And unfortunately I don’t leave Mexico for any reason early because I don’t fly, I have to drive it. And so I declined. But I told them that anything I can do for Governor Johnson in his campaign I will be happy to do.

And they left the door open. They said, ‘Would you consider 2016?’ I said, ‘Well, will cross that bridge when I get to it.’ But I will fully support Governor Johnson. I know him. We were Governors at the same time. He is a terrific man. He’s left the Republican Party because he sees what a farce they are and I urge everybody that reads this book vote for Gary Johnson for president. Don’t vote for Democrats or Republicans. Vote for Governor Johnson.”

Ventura further stated about his support of Gary Johnson for President of the United States:

Commenting on Jay’s three part plan – which we have been discussing with a variety of people across the political spectrum – that members of Congress, the president and vice president take a 50 percent pay cut and give up their rich after office benefits, accept a lifetime ban on lobbying and that members of Congress be subject to term limits, former Governor Ventura gave his thoughts and offered his own suggestions:

“They’re very valid. Let me take the last one first, term limits, I can tell you and it kind of ties into the first two, I can tell you how to get term limits without even getting them, you know how? Take away retirement. Why should you get a retirement for public service?…They spend 20 years there and they get some fat ass retirement, you take away retirement and most of these guys are not gonna serve. Nobody’s gonna put 20 years into something they don’t get a retirement for…No politician should be allowed to go into the lobbying business when they leave office because that’s what they all do too. Once they leave office they become a lobbyist because they know all the ropes, they know how to do the bribery, they know how to manipulate the whole system out there and that’s another way they get rich.”

Speaking of the last time he heard from Vince McMahon [Chairman of the Board of Directors & Chief Executive Officer of World Wrestling Entertainment] Governor Ventura says this:

“I haven’t spoken to Vince since he got mad at me ‘cause I wouldn’t endorse Linda for the senate…He got mad at me because I was on Good Morning America or something and they asked me would you support Linda McMahon? And I said no. But let me explain, I don’t support any Democrats or Republicans. She’s running as a Republican and I don’t support anyone from those two parties no matter who they are and so it was nothing personal against Linda, but Vince got real mad at me that I said that on national TV, but he should’ve known better.”

Speaking of the last time he spoke to former Governor of California Arnold Schwarzenegger:

On Jesse being in The Expendables movies:

As far as acting, Jesse will be in a movie with Tom Sizemore called The Drunk. It’s a little bit of art imitating life for the former Minnesota Governor. Jesse speaks about Sizemore overcoming his past troubles:

“My role is I play the independent Governor of Indiana who’s leaving office. So I think I have a pretty good past for that…Tom seemed right on when I met him. He was fun to work with. He was super professional and I wish him well because he’s a wonderful guy. He’s had some demons in his life which we all have had, but I think Tom has gotten over the hump hopefully and that those demons may not bother him like they did.”

In his latest book, Ventura tells the world he was part of the Mongol Motorcycle Club in the 1970s. Jesse reveals to us a secret.

“I am retired and in good standing with them. In fact I’ll give you another little first, they have a fight song that they sing within the club, ‘We are Mongol raiders, we’re raiders of the night.’ I am the composer of it.”

To sum up the state of America, what with the incredibly high government debt many are concerned about, Jesse says this about today’s politicians: