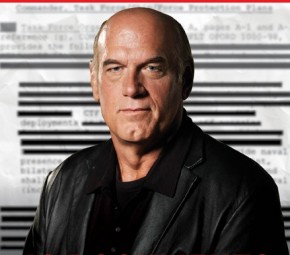 We last had former Governor of Minnesota Jesse Ventura with us on CYInterview about a year ago. We welcome Governor Ventura back – for a third time – to discuss his latest book 63 Documents The Government Doesn’t Want You To Read. International columnist Jay Bildstein joins me, as always, for this latest roundtable interview with the former Governor. This compelling interview goes almost 50 minutes. You can listen to the interview, in its entirety, below:

In the closing months of 2010, WikiLeaks and its head, Julian Assange, entered the popular consciousness. Media outlets and talking heads began conversations about whether it was right or not to release many government documents in the way that Assange’s organization did. Mr. Ventura says he and his coauthor Dick Russell began work on their book before the WikiLeaks story broke.

“We started this book before WikiLeaks even broke. Then while we were doing it was when the whole WikiLeaks happened. We were overjoyed because the first thing was, we were able to use some of the documents that they produced in the book or they’ve produced in our book. Also the fact that it was such a major, major, major reaction to that, that we knew that when our book came out it would probably be very hot…The only reason I’m able to write this book and do a lot of the things I do like my TV show is because mainstream media’s dropped the ball.”

Regarding the 1994 Rwandan Genocide, Ventura says the following in his book “Clearly there was nothing in Rwanda for corporate America to profit from and it seems today that’s the only time we get involved…Humanitarian reasons are not good enough, there’s got to be financial gain.”

Recently, various mainstream media outlets have labeled the United States led coalition effort in Libya as a humanitarian undertaking aimed at preventing the regime of Dictator Muammar Gaddafi’s government from killing its own citizens. Jesse says he believes the United States is in Libya because of oil. He further states that the U.S. military is the strong arm of the corporate world and is not about the business of protecting Americans at home.

“There’s a lot of oil in Libya isn’t there? Why Libya and not Rwanda? Because there ain’t no oil in Rwanda. It isn’t just now…I will tell you this, young men and women that join the military today, they’re not protecting us. That’s a joke. They are now the strong arm of the international corporate world.”

Ventura says he doesn’t care one way or another about meeting or speaking with Julian Assange. What’s important to him is the information. He dedicated his new book to Congressman Ron Paul because Paul got up in front of Congress and defended WikiLeaks, pointing out that it had killed no one.

Given Jesse’s consistent points of view, which question the government’s motives in various instances, the former Governor says no one has ever threatened him and he doesn’t fear for his life.

“You got all these elected officials who are saying we should charge Julian with treason. These people want to be President and they’re so stupid that they don’t even know you have to be a citizen of the country to be charged with treason. Assange is an Australian who works out of Switzerland. How do you charge a foreigner with treason? … I’m not gonna live my life in fear that someone’s going to retaliate against me.”

“We have to get rid of these electronic voting machines. I’ll give it to you in simple form, they can be hacked into the same as any computer…Electronic voting machines are like an ATM that doesn’t offer a receipt. You have no way of knowing that when you push that electronic machine and vote for say Al Gore that it registered for Gore. It could’ve registered for Bush if’ it’s been hijacked.”

Jesse says he would be open to speaking with fellow Navy veteran and frogman, the famed Ret. Commander Dick Marcinko, who he mentions in his latest book, about “Demo” Dicks’ perspective on what happened on September 11th. Marcinko is a former United States Navy Seal, who commanded Seal Team Six and Red Cell. By all telling, he was a Special Forces operative extraordinaire. He went on to give insight into some of his exploits when he became an author after leaving the Navy.

“I haven’t spoken to Dick now for probably 10 or 12 years because he’s doing his thing and I’m busy doing my thing. No. I really truly have not sat down and that’s a good point. Maybe I ought to do that.”

With some in America still questioning whether President Obama was actually a native born citizen, former Governor Ventura doesn’t know what to think on that matter. However, on another Obama related topic, Jesse says he has heard allegations that, perhaps, Obama was part of the CIA. He poses the question:

“I don’t know what to believe on it. To me, I don’t know. You know, I’ve also heard too that Barrack Obama was part of the CIA…If you look at his history, why was he traveling around the world all the time in all these foreign places in his younger days?”

Jesse would love to get back into movies and doesn’t rule out the possibility of returning to professional wrestling. He also speaks about his relationship, today, with his former boss Vince McMahon of the WWE.

“Wrestling, I doubt that would ever happen. The answer that I always give to that is certainly I’d go back to wrestling if Vince puts the decimal point in the right place…I probably speak with him [Vince McMahon] maybe once every couple of years, maybe for whatever reason we may talk or something could come up or we communicate. No. WrestleMania is tomorrow. He didn’t call me to do anything in that and I didn’t expect him to at all. So you know, but who knows? I’ve learned at age 59 that you never say never.”

Potential Republican presidential candidate and former Governor of Minnesota Tim Pawlenty, states in his book, Courage to Stand an American Story, that when he was House Majority Leader in Minnesota, then Governor Jesse Ventura came and saw him and started shouting at him after a comment Pawlenty had made claiming the governor had left the taxpayers behind enemy lines. Jesse says he never shouted at Pawlenty and wasn’t even aware that his former fellow Minnesotan governor had even written a book.

Ventura takes things a step further, saying Govenor Pawlenty will have to address the six billion dollar budget deficit he claims Pawlenty is responsible for. Jesse says had the state politicians in Minnesota accepted his own budget proposal before he left office, the State of Minnesota would have a budget deficit in the millions and not the billions.

“I never yelled at him. I just walked over to him. That’s not true at all. I didn’t shout. Not at all. I just looked at him firmly and said, ‘I’m a Navy Seal. We don’t leave anybody behind. Take a look at our record…We use to play golf once a year up until last year…I never commented on him because my belief is this, when a Governor leaves office, you should not become an armchair quarterback to the next Governor…Should Governor Pawlenty run for President? He can run, but let’s remember, he left Minnesota with a six billion dollar deficit. He was responsible greatly for that because at the end of my term, I put forward a balanced budget and the Democrats and Republicans didn’t accept it…Had they accept my budget in Minnesota back then, the deficit they’re facing today as one report said would be in the millions rather than the billions.”

Being the former chief executive of a state, Ventura gives us his insight into how the United States can balance the federal budget and get out from underneath massive deficits. These are the deficits that many people, inside and outside of government, are currently concerned about.

“Can we get out of this? Yes. But one of the big things to get out of it, we need to pull, we have military stuck in something like 240 countries throughout the world. Let’s shut down all those bases…What is our military doing in all those foreign countries? Bring them all home and shut those bases down and then cut defense spending. If we can cut defense spending in half, we could balance the budget, we would have no problem whatsoever with anything.”

With talk of Donald Trump possibly running for president, we asked Governor Ventura what he makes of it. Jesse considers “The Donald” a friend of his. However, he does not think Trump is serious about running, but if he is, he has one piece of advice for him.

“I don’t think Donald’s serious. I know Donald and I consider “The Donald” a friend of mine. But I think Donald just does it ‘cause he likes the spotlight and he knows that if he shakes and rattles about running for President and all that, he’ll get tremendous publicity out of it and Donald likes that. He likes to be in front of a camera…The thing Donald’s got to do though if he runs for President, you know the one thing he needs to do, which will shut up the media, shave his head. He’s got that God awful comb over and that’s all the media ever talks about. That’s what they nail Donald on every time is his hair.”

Having dedicated 63 Documents The Government Doesn’t Want You To Read to Congressman Ron Paul, we asked the former governor if he would consider running as a vice-presidential candidate with Ron Paul, who has run for the presidency in the past. Jesse said he would give it very serious consideration if Ron Paul would run as an Independent and quit the Republican Party.

“If Ron Paul would quit the Republican Party and run as an Independent and if he came to me and said, ‘Governor Ventura, would you be my vice president?’ I would give it very, very serious consideration. Absolutely…The only problem is, maybe Ron and I would have to flip a coin to see who would be President…I wouldn’t mind the VP job because then see, I could still go down to the Baja (editor’s note: Ventura spends about half the year in Baja California in Mexico.)”

Finally, in reference to things like the Charlie Sheen story, which many mainstream media outlets spent inordinate amounts of time on, covering Mr. Sheen’s personal issues and his relationship with CBS and the program Two and a Half Men, Ventura weighs in on what the media has become and what it does to the average American media consumer.

You can find more out about Jesse Ventura at http://weaintgottimetobleed.com/

Below is a list of Ventura’s book signing appearances: