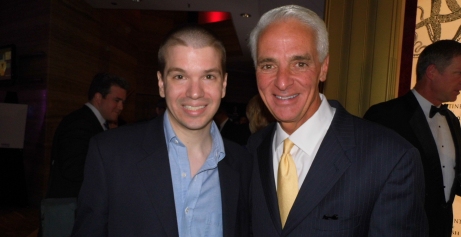 On Monday November 4th, former Governor of Florida, then Republican, Charlie Crist announced his plans to challenge Florida’s current governor, Republican Rick Scott, in the upcoming 2014 election cycle. This time, Mr. Crist will be running as a Democrat.

Two days before his official announcement, Mr. Crist told CYInterview, at the InterContinental Miami™ Make-A-Wish Ball, that he was definitely going to run to be Governor of the Sunshine State again. The former Governor of Florida has taken time off from politics, since losing a race for the U.S. Senate in 2010 against Marco Rubio.

You can listen to the entire CYInterview and read the highlights below:

Discussing his plans to become Governor of Florida again, Mr. Crist said this:

“I practice law. I’m with the Morgan & Morgan law firm based in Orlando, but all over the state and frankly the country. But I just announced yesterday I am running for Governor as a Democrat and I’m very excited about it and very hopeful for Florida.”

With a gridlock in Washington and the American people dissatisfied with government at all levels, Charlie does feel he can make a difference in Florida if he wins the 2014 gubernatorial race:

“I certainly hope so. I think Florida needs some help. I know they do. I’ve been disappointed unfortunately in the current administration and I think we can do so much better in education, ethics, the environment, the economy and that’s why I’m running.”

The former Governor came out with his wife Carole to support the annual InterContinental Miami Make-A-Wish Ball because he believes the organization does a great job helping people. Speaking about his other charitable causes, he told us this:

“We are involved in CASA over in Pinellas County. It’s Community Awareness Stops Abuse, also obviously, Make-A-Wish and as many things as we can and all of Florida.”