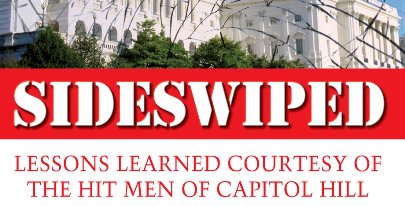 Though it has been at least seven years since the scandal involving high powered lobbyist Jack Abramoff shook Washington, D.C., there are still pieces to the story being revealed. There seems to be a consensus in America that today’s political leadership leaves a lot to be desired. Many believe there is an unhealthy mix of lobbyists and money with self-interested politicians all too open to being influenced on issues based on who curries favor with them.

Former Republican Congressman and House Administration Committee Chairman Bob Ney of Ohio was entangled in the Abramoff lobbying scandal and ended up serving 17 months in prison. In his new book, Sideswiped: Lessons Learned Courtesy of the Hit Men of Capitol Hill the former Congressman offers a candid portrayal of the conflicts of interest and corruption currently damaging America’s political system.

In a 50 minute CYInterview with former Congressman Ney, featured columnist Jay Bildstein and I spoke with him about what can be done to fix the system in Washington. He provided some interesting insight on the state of America’s politics.

You can listen to the entire CYInterview or read the highlights below:

Former Congressman Ney provides solutions – some that he claims could be done in a matter of hours – to decrease the corruption and conflicts of interest in Congress:

“There are some things that can actually, literally be done in a matter of hours. Not days, but a matter of hours and that could be done by John Boehner and Nancy Pelosi together as the Democrat and the Republican. And what can be done immediately, first of all, internally the Congress and this happens with both parties, I’m only familiar with my party, the Republican Party I was in, but they will assess you know if you want to be a chairman of a committee, it is no secret that you will raise a certain amount of money.

My task was $150,000 to go into the Republican Caucus for elections. Some people have to raise half a million, a million. People who don’t comply with that really don’t usually succeed. So internally, they can just say, ‘Look, we’re not gonna assess people for positions anymore.’ I mean that’s the selling of positions. Let’s put it right out where it is. The other thing that could be done is to uncodified what they have done into law when it came to people like Jack Abramoff and I. All of the meals I had with Jack, the travel, any of the alcohol I drank, whatever Jack Abramoff and I did has now been put into law…

The constant practice of taking federally paid staff members, which happens, taking them across the street to the Democrat or Republican war rooms as I call them and raising money on federal time can instantly be stopped and the internal money raising machines. You know good people are in D.C., there’s some really good people in Congress, but the system itself is so money geared that good people that want to do their job are gonna find it quite impossible because the system’s corrupt.”

Congressman Ney is candid about his challenges with alcohol abuse in his book. In Swideswiped, he calls himself a functioning alcoholic. Asked whether poor lifestyle choices by members of Congress were commonplace – things like drinking, smoking and overeating – and if it impacted their ability to do their jobs, Ney said it was not the norm, but it did exist. He also notes that damage to one’s mental health exists in America’s political landscape through such things as intimidation:

“I don’t think every member, you know, is smoking cigarettes, drinking and gaining pounds. I think most of them are gaining pounds because their habits and their lifestyle right now out there. It’s just fast paced, lot of receptions, lot of different food and some bad living habits I think. So that in general is out there. … I not only think physically some people have gotten themselves into bad situations out there in the high lifestyle, which is not a good lifestyle, but also I think mentally the attitude is you know shut up or you’re gonna get run over.”

Over the last year and half, Jay has put forward propositions to various members of America’s political elite on how to get the nation back on track. He has proposed that the president, vice president and Congress take a 50 percent pay cut to demonstrate leadership at this time of fiscal distress. He also proposes that there needs to be a lifetime ban on lobbying by all former elected officials and that lobbyists should have their meetings with members of Congress logged, videotaped and posted on the Internet. Last but not least, there should be term limits. Bob agreed with Jay’s propositions and had some extra things to add on:

“I like what you said first of all. It’s dramatic, it’s aggressive, it may be called radical, but it’s a wonderful, wonderful beginning and you could add in there no staffer can go through the revolving door. You gonna be a staffer on the hill, you don’t take a lobby job like a member of Congress doesn’t do it either. You can do that. On top of it, when members of Congress take trips, this is a little secret, they get a per diem, so much spending money per day that’s unaccounted for. It still happens today. That can be eliminated.

If you take a trip where you’re going for some public process reason overseas, you can take three extra days and do what you want to do. Eliminate that type of thing so the trips are purely of substance. So yes there’s other little caveats that people could really dig into the bowels of the government for all the excesses, leased cars, you know on and on and on that can be done that would be I think not just trite. I think what you’re saying is very good and it’s a point of substance that can help make a dramatic change.”

With millions of Americans still unemployed and the country going through challenging economic times, including things like an enormous federal deficit, some have questioned whether or not President Obama has gone on too many vacations and, thus, not shown true leadership. The former congressman gives his thoughts:

“He [President Obama] shut down the White House tours and at that time I told friends of mine that was the worst one. He shuts down the White House tours, almost shuts down the Easter egg hunt, but he continues to take multiple vacations. That’s not leading by example. Don’t shut down the tours of the once in a lifetime for the kids coming to Washington. You know instead of 17 vacations, take three, how about three instead of 17.”

In his book he makes numerous claims about current Speaker of the House John Bohner. One of those claims was that the Speaker had lobbyists pay for his bar tabs and golf games. Beyond that, former Congressman Ney also alleges that Mr. Bohner offered him a job and assistance on his legal bills if he would resign from Congress back in 2006. Bob would end up resigning from Congress because he claims he accepted Speaker Bohner’s deal. He states the current Speaker of House never kept up his part of the deal. He tells us his side of the story below:

“The amount of people that have seen John Boehner over the years sitting there at the Republican club drinking every night and eating it’s, you’d have to have a line if somebody decided to call them in. It’s just one of those things. It’s never been pursued. … I mentioned these things with Boehner not to pick on him, but in the context that he had a staffer Barry Jackson who went to work for Karl Rove, they wanted the appointment of Alice Fisher and that all tied into me because once I did my idiocy and my criminal behavior, they saw a way to go over my back to get Alice Fisher her appointment.

She had covered up the torture when the FBI came to her and she had worked in the criminal division of the justice department. Senator Levin was after her because she was close to Tom Delay’s defense team. Alice Fisher was also being yelled at because she wasn’t doing anything about Abramoff and along I came committing my crimes, but a very convenient tool so she could get her appointment. Now that was all inside baseball. Nobody pursued that because the justice department didn’t want to pursue it. So you know it’s whoever’s guarding the hen house decides which hen’s gonna be round up and have their head chopped off. …

I mentioned that part because at the time again if we want to talk about anger, you better believe I was angry and I was also drinking at that time and that fueled the self-pity and the anger and the resentments at that time. Now at the end of the day he probably did me a favor by crossing me over because I got into a rehab program so I kind of look at the bright side of what he did. But the fact remains John Boehner did nothing different than Rod Blagojevich who is sitting in prison for 14 years right now. John Boehner said to me, ‘If you stop running’ and he said, ‘You only have 24 hours and the deals off. If you stop running.’ I’d stay in Congress for a while, but I would pull out of the election.

He said, ‘I will find you a comparable job to what you make.’ He said, ‘I know you don’t have a lot of money.’ And he said, ‘I will raise you money to help with your legal defense fund to help you put this stuff behind you.’ He offered me money to leave just as Blagojevich was offering money for seats. He offered me money to leave. He did it. That can be backed up. There’s people that know this happened, people that we’re involved in trying to secure a job and he just went back on his word. So I don’t know what, if that doesn’t smell bad, I would think it’s surely illegal, but again it depends on who wants to pursue that.”

One Reply to “Former Congressman Bob Ney Speaks Candidly about His Conviction, Congress, Corruption and His New Book, Sideswiped: Lessons Learned Courtesy of the Hit Men of Capitol Hill”