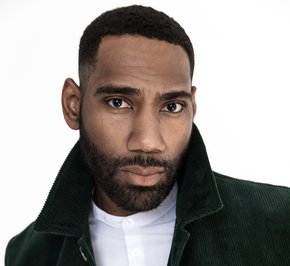 In July, actor Anthony Alabi will have his first lead role in the Netflix series Family Reunion. It is a comedy about a family moving from Seattle to Georgia. The series also stars past CYInterview guest Tia Mowry [see here] as well as Loretta Devine.

A former NFL offensive tackle, Anthony is the latest football player to have found success in Hollywood.

After a few years in the league, Anthony told everyone he was moving to Los Angeles to pursue his acting career. Though he majored in criminal justice and criminology while in college, the former pro football player had a passion for acting. He remembers sitting with his father in theaters and watching movies all day Sunday as a youngster. Anthony’s father, who is Nigerian, is a big film fan.

Now, with a lead role in a Netflix series, Anthony has a chance to perform in another big arena. This time the arena is Netflix and not a football stadium with thousands of screaming fans. Though he was an NFL star before becoming an actor, he says being an actor was his first desire:

“I wanted to be an actor since I was probably seven years old, six, seven years old. You know, my father is Nigerian. And so, he loves movies. And being, you know, a foreigner, he really loved American culture and loved the movies for that. So, we would go to the movies on Sundays pretty much from like 11:00 AM to like 9:30 PM and just watch everything. You know, and I would sit there and I wanted to be everything that I saw after the movie’s over. … My father was like, ‘Well, you know, you can be all those things if you’re an actor.’ And I was like, what’s an actor? And he explained it to me and it just, I lit up. I think that, from that moment, I was like, this is all I want to do.”

Anthony also credits former football players Terry Crews and The Rock for inspiring him to be an actor. He has achieved success in two very competitive fields.

In July, as the male lead of a Netflix series, Family Reunion, more people will come to know Anthony Alabi as an actor.

You can listen to the entire CYInterview with him below:

Photo credit for this piece goes to Diana Ragland.

You can find Anthony Alabi on Instagram clicking here.