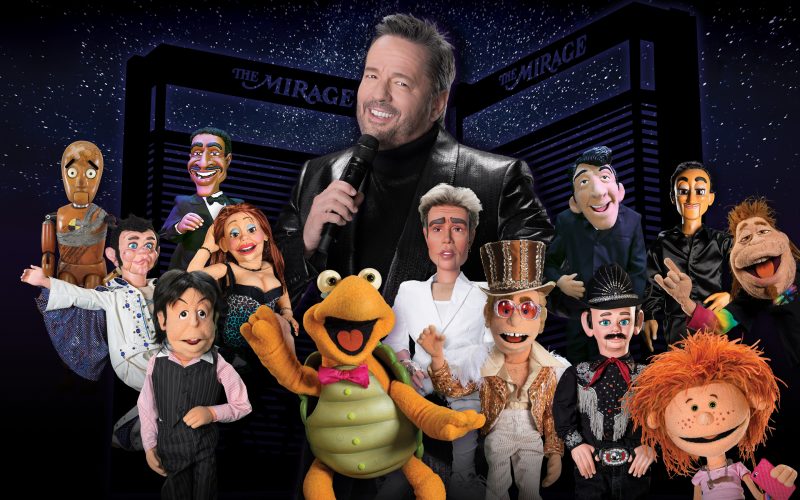 Before winning season two of America’s Got Talent, it was actually a show in Las Vegas that inspired Terry Fator to pursue his passion. Mr. Fator is a singer, impressionist, ventriloquist and comedian. His unique combination of talents led him to winning America’s Got Talent. And just as Las Vegas inspired him to make his dreams a reality by seeing the late comedian and impressionist Danny Gans’s show here, Terry Fator celebrated 10 years of having his own Las Vegas show earlier this year.

His show, An Evening with the Stars, at The Mirage Las Vegas showcases him doing impressions and singing, using a variety of celebrity puppets representing everyone from Elton John to David Bowie to Rat Pack members Frank Sinatra, Dean Martin and Sammy Davis Jr., among others. Animal puppets are included in the show, as Winston the Turtle is showcased throughout, as Mr. Fator’s sidekick.

Terry Fator has a show, unlike any other you will see here, with singing puppets, impressions and comedy. He has rewritten the show many times over the last 10 years, in order to keep it fresh. The Las Vegas headliner believes that is one reason why his performances have had staying power in a city where audiences have many options in terms of entertainment. He also has a yearly holiday show, which begins next month.

After attending one of his recent performances at the Terry Fator Theatre at The Mirage Las Vegas, we had a chance to subsequently CYInterview the America’s Got Talent star, about a variety of topics. You can read the highlights and listen to the entire CYInterview below:

Terry Fator tells us how seeing former Las Vegas headliner, comedian and impressionist Danny Gans’s show made him realize his unique talents of ventriloquism, impressions and singing could be a career, telling us:

“It just didn’t feel like that amazing of a thing. So, I didn’t really realize how people would fall in love with it until I saw an impressionist in Las Vegas named Danny Gans. … I honestly had no idea it would take off the way it did.”

Focusing on another impressionist in Las Vegas, Terry gives us his thoughts on show business legend and past CYInterview guest Rich Little [see here and see here] and his show at the Tropicana:

“I’m so pleased that he’s still performing and I’m still happy that he’s there because my wife and I went to see him and you know, a lot of younger people wouldn’t really like it because it’s older stuff, but it’s stuff I grew up with. You know, it’s Jimmy Stewart and Johnny Carson and people that we grew up with and wow, what an amazing show. So even if you’re a younger person and you like those, that era that you know, maybe the 60s, 70s and 80s, you should absolutely go see Rich’s show.”

The multitalented entertainer always believed he would have a long residency on the Las Vegas Strip. On celebrating 10 years in the Entertainment Capital of the World this year, he tells us why he thinks people like his show at The Mirage Las Vegas:

“I do over 200 impressions of singers and I do it through puppets and it’s really something that I think the reason people love it so much is that it’s a whimsical. It gives us a chance to be children again. … My dad wanted me to be a pastor and an evangelist and I just never felt that calling, but I feel that I did live up to it one sense, I feel that I am an evangelist of joy. And that’s really what I hope you get from it.”

As a reality TV talent show contest winner on America’s Got Talent and a Las Vegas headliner with his show An Evening with the Stars, would he ever consider competing on the popular reality show Dancing with the Stars?

You can find more information about Terry Fator and purchase tickets to his show in Las Vegas clicking here.