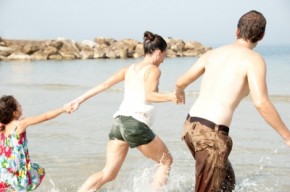 This Father’s Day is a good time to reflect on all the things our Dads have done to help us in our lives. It’s sad we only focus on fathers one day out of the year. After all, a good father is worth his weight in historical heroes. In any event, to fathers everywhere, thank you!

Below is a list of some names and phrases containing the word father, dad or something similar. We did Mothers for 500 Please on Mother’s Day, so it’s only fair we pay tribute to dads on Father’s Day. You are likely to be able to add to the list. Post some that come to mind if you like. Yes, yes, technically we should start with “Who is” or “What is.”

Father Christmas – a predecessor, of sorts, to Santa Claus

Father Came Too! – A British film

Fatherland – like motherland and homeland, a way of referring to a nation; unfortunately it tends to call to mind the Nazis

Father Time – a representation of time in the form of an old, bearded looking guy

The Godfather – the name of an iconic movie

Daddy Long Legs – a name used for a certain kind of arachnid; a novel, the title of a bunch of movies

Daddy-O – Beatnik slang; used like dude or man. Also, utilized when talking down to an older guy or male authority figure

Sugar daddy – a guy who takes care of a woman, typically in return for sex