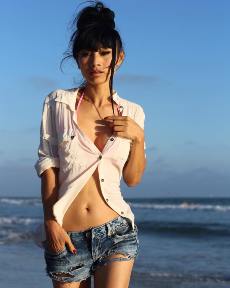 Discussing the actor’s craft, Hollywood, the Internet and life in general, it becomes apparent that actress Bai Ling is an intelligent and reflective individual. Over the last 20 years or so, she has turned in stellar performances in such movies as Red Corner with Richard Gere and Anna and The King with Jodie Foster. Additionally, though she was not in the final cut of the movie, she also had a role in Star Wars: Episode III – Revenge of the Sith. That same year, 2005, Bai Ling was the first Asian woman to appear on the cover of Playboy Magazine and appear as its centerfold.

Many in the general public might know Bai Ling as a beautiful actress who has turned in some memorable performances over the last 20 years. Others will likely know her as a sizzling hot celebrity, showing up at events in head turning outfits. But putting that aside, she is a person of depth and substance. In short, we can all learn from her. Ask her a question and you get a story, giving you something to reflect upon. She continues to act and has a video series she shares on her Facebook page called Bai Ling’s Show. She is also in the early stages of writing a script.

Featured columnist Jay Bildstein joins me for a chat with Bai Ling about a variety of topics. You can read the highlights and listen to the entire CYInterview below:

On the state of Hollywood and the under representation of Asian actors on screen, this is what Bai Ling told us:

“The film industry, like in Hollywood, it’s a factory. They produce products for people to consume, for the people who want it to consume. In America, the majority of consumers are white, it’s Caucasian. But Asian is the minority, so therefore they will not put us in the mainstream and to be leading female, leading male actors on screen. I accept and understand that because it’s a factory making products. Like in China, we don’t see a lot of Caucasian leading actor, actresses in our films. So that’s just a fact. But that’s why, you know, I like travel. I think the world is traveling through cinema too. So you can, through traveling you gain so much things, so many things that you cannot enjoy where you’re just standing where you are. So that’s something I understand about Hollywood, about life, about acceptance of the things you wish otherwise.”

She now has a short video program you can see on her Facebook page called Bai Ling’s Show where she discusses social topics. For example, one topic she recently spoke about on her show the Internet:

“We’re losing the culture. We’re losing the essence, the beauty of the culture by how the world has become Internet obsessed for everybody. So there’s something that’s good and bad, but I still feel like that’s why a lot of people like withdraw from all of it. I think a lot of people missing. I think if people are deeper, they’re missing so much more than the Internet. So I just hope like all the young people, if the parents can stop them going like eight hours on the Internet and if they can just be like two hours a day, I think then they’re true to when they grow up, they will appreciate so much more about what real life mean.”

When it comes to her film career, certainly, there are great roles that Bai Ling has inhabited. The one that may arguably stand out is her part as an attorney in the 1997 movie Red Corner with Richard Gere. This is what she tells us about the role:

“Still one of the most joyful and profound character I have ever created because she’s smart and she’s sensitive, she has many layers as a female and also she’s very successful lawyer. So that’s very rare character for a Chinese actress. So I’m very grateful for the director John Avnet casting me. The casting process, you will not know, they looked all over the world, every possible, like famous actress all over the world, Europe, Asia. …

At that time I was in Los Angeles, I don’t know how to drive. I just basically learned and I was so afraid I would not find the studio office to audition. I got there three hours earlier just to watch the beauty and I said, ‘The beauty will never leave me. I know where I’m going.’ So I told the story to the director and I think he was very moved by my story. …

I don’t know who Richard Gere was at that time because I don’t like a lot of people calling, oh he’s such a big star, you’re opposite with him, you’re in the Mecca of Hollywood. None of this makes sense to me, but all I knew was like, well, I read the character, I knew I can give everything to the character where I will show you what a really beautiful Chinese woman is.”

Bai Ling’s efforts paid off as she received much acclaim for Red Corner. In fact, she won the National Board of Review Award for Breakthrough Performance of 1997. The following story involves her and three time Oscar winner Meryl Streep:

“When I got the National Board of Review Award, I have no clue what that is. And my manager, everybody told me that’s most difficult to get because the critics vote for it. So the award place is in this Central Park, the Green House [Tavern on the Green] I think it is restaurant on the lake. So I got there and I was so nervous because I have to give a speech and my English is so limited. So when I get on the stage I was like trembling. You know what I saw? I saw Meryl Streep was sitting in the front row looking at me with that smile. You know, Meryl Streep’s, Meryl Streep’s so big in China. She almost like, you know, like she’s the person of you know, how do you say it, almost like a Goddess of actress, like in all over the world.

And she was sitting; normally I watch her on screen and all the stars, whatever. She was just sitting in front of me watching me receiving award. I was like, wow, this is something. I knew somehow I did right. I was like, basically because I saw her, I forgot what I was supposed to say. Basically, when I finished my speech, I didn’t know what I said, but that was just an experience.

Yeah. You’re right. I think I’m very humble, but in this case as actress, I’m like, I just feel like I should have got Academy Award because that character’s just brilliant. I created a brilliant actor [sic: actor]. Even like the actors, I got to know so many of them, like, what’s his name who played Gandhi? Ben Kingsley, right? Yeah. He said such a, such a, such an intelligent, sophisticated performance. And also I meet so many, like actors, I don’t want to name all of them. Some of them liked learned basically teaching, the best teaching in Hollywood, they said this to me, they said, ‘Meryl Streep is the master, but you are the original.’ I couldn’t understand that. Basically I write it down and I ask my friend. I think that’s the highest compliment you can get.”

On what else she is up today, the age defying actress is also in the early stages of writing a script:

“I think probably in life sometimes because I’m frustrated as an actress because I have a gift, but no where to give. That make me think that maybe I should do something else. So I, basically right now I’m writing something myself, a script and because I know if I play a normal role, people know I’m good. So that’s not interesting to me. I want to do something that’s shocking people, shocking people in an artistic way. I’m writing something. It’s a comedy. But you’ll never imagine this could be done, but I think my mind works the way, it’s not me, it’s nature, gave me this manuscript. I’m just revealing it.

It’s just something so fascinating, basically, I want to make this into movie. I have no interest to be a director or producer because I feel that’s a male, a man’s job because when woman do it, they become masculine. They become like not feminine anymore. I want to keep myself as feminine, female movie star.”