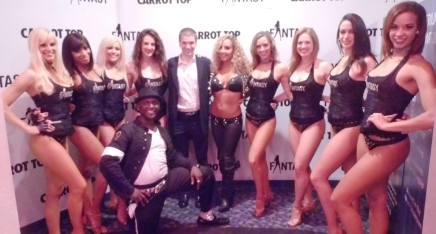 For over 15 years on the Las Vegas Strip, the ladies of Fantasy have been entertaining crowds and winning awards. Voted the Best Showgirls in 2015 and 2012 by the Las Vegas Review-Journal, among other accolades, Fantasy is incredibly choreographed dance entertainment, showcasing beautiful women, who at times are topless. Add in the skills of the show’s lovely hostess, Lorena Peril, who demonstrates great singing chops and impersonator Sean E. Cooper as some of pop culture’s most well known stars for comic relief, and you have one the best variety shows in Vegas. The show plays nightly at the Luxor Hotel & Casino with a start time of 10:30 PM. This show is for adults only.

If you thought Fantasy might draw a principally male demographic, you would be in error. The evening I saw the show, the crowd featured couples and adults of all ages and backgrounds, both male and female. This performance has something for everyone. You can see my picture above with the cast of Fantasy, including the smoldering Lorena Peril, talented Sean E. Cooper and, of course, the beautiful women who make the evening memorable.

The ladies of Fantasy are some of the nicest performers you will ever meet. After the show, the women sign autographs and pose for pictures downstairs at the merchandise counter. They are very fan friendly. In no particular order, the ladies of Fantasy are Mariah Rivera, Sonya Sonnenberg, Delecia Dean, Yesiney Burgess, Ashton Joseph, Shanlee Walstad, Dar Brzezinski and Amber Strausser.

For those looking for a non-stop entertainment show in Las Vegas, with some of the most beautiful female dancers you will ever see, Fantasy is a must for any adult visiting Las Vegas. It is an evening not to be forgotten.

You can find more information about Fantasy at the Luxor Hotel and Casino here.