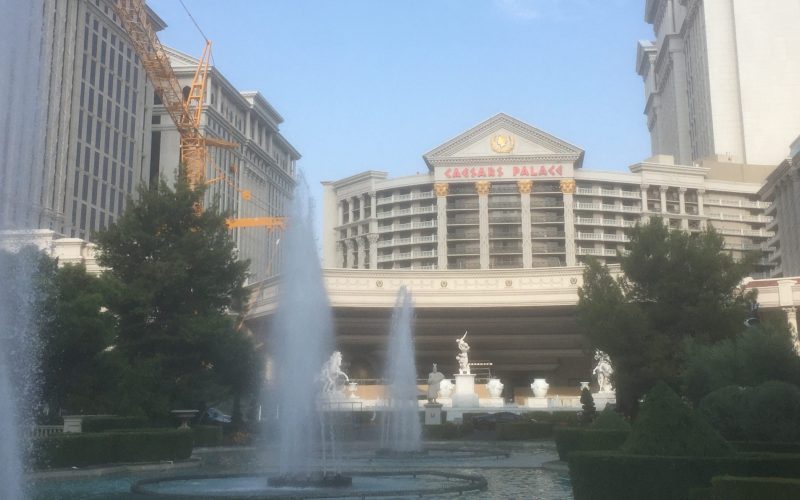 The founders of Caesars Palace were Jay Sarno and Stanley Mallin. Its Roman theme has been maintained since it first opened in 1966. When you visit the famed Las Vegas Resort, you will see Roman statues both inside and outside of it.

There are many things that could be noted about the history of Caesars Palace. Here are a few:

In sports, boxing matches including those with Muhammad Ali and past CYInterview guests George Foreman [see here] and Evander Holyfield [see here] were hosted at the hotel. Legendary daredevil Evil Knievel jumped the fountains at Caesars Palace on a motorcycle on December 31st, 1967.

In entertainment, Caesars Palace has had many superstar concerts including those with Frank Sinatra, Liberace, Elton John, Gloria Estefan [see here], Diana Ross [see here], Ricky Martin [see here], Stevie Nicks, Dolly Parton and the list goes on and on.

Aside from one-night-only performances and artists doing a set of shows at Caesars Palace, in 2003, Celine Dion’s New Day Las Vegas residency kicked off. It ushered in a new era of entertainment for the city. During Celine’s time at the resort, she performed over 1000 concerts there.

In cuisine, famous restaurants originating in other areas of the country including The Palm, a renowned steakhouse in New York City and Joe’s Seafood, operated by the group who own the well-loved Joe’s Stone Crabs in Miami Beach, have operations at Caesars Palace.

Speaking of the world of cuisine, last week, we reported that reality TV couple Bill and Giuliana Rancic are bringing an Italian restaurant to Caesars Palace in 2022 [see here].

Caesars Palace is a resort/casino with an extraordinary history. There are many reasons why you should visit it when you are in Las Vegas. It has something for everyone.