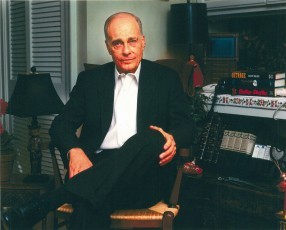 When Vincent Bugliosi visited us for a CYInterview back in February (see here), he gave us an interesting preview of his now released book, Divinity of Doubt: The God Question. For this go round with the well known attorney, thinker and author, international columnist Jay Bildstein – a powerful thinker himself – joins me for a 90 minute conversation. Both men discuss Bugliosi’s book, along with many intriguing points on numerous theological topics. You can listen to the interview/90 minute discussion below.

Listen to the entire 90 minute CYInterview with Vincent Bugliosi:

When it comes to Divinity of Doubt, Mr. Bugliosi believes his book will have an effect on people who read it and their perspective of religion will change.

“I do not believe any rational person can read this book without having some effect on how they feel about God and religion. I think anyone who reads this book is never again going to feel quite the same way about God and religion and that’s the precise reason why if someone is deeply religious and they accept God completely and Jesus and their religious belief gives them tremendous comfort and solace and strength, I’m telling you right now, I do not want them to read this book.”

In our last interview, Vincent said he was serious about prosecuting former President George W. Bush for war crimes. In an interesting discussion, Bugliosi gives us an opinion on what might happen if he were able to get an indictment against the former President. Vince believes the case would end up in front of the Supreme Court. Here are his thoughts on what could happen if it reaches the highest court in the United States:

“This is a very, very real thing. At the very moment we’re talking right now, although he may have gone to bed, there is a constitutional law professor who I’ve mentioned before. He submitted a 96 page document to me handling every conceivable legal argument that the defense could come up with if I get an indictment. Typically, I found many, many things that were defective, deficient. I sent it back to him. He’s had 12 students in his class helping him on this. I still have not gotten the final report from him.

He’s promised me that it will be coming in at the end of this month… I wish I could be more explicit, but this whole thing is very, very, very much still alive. It’s very alive. I’ve made progress. I haven’t gotten an exact commitment, but I can tell you and I don’t want anyone misinterpreting this, that it’s going to happen, but I’m just saying that this is very, very much alive. I am very encouraged. So please, I don’t want to ever hear that it’s coming back on the Internet that Bugliosi has a prosecutor and it’s gonna happen, but I’m telling you I’m making a lot of progress…It’s the most important to thing to me, more important than this book…

If something happens, you’re gonna read in the papers that there’s been an initiation of a criminal if something happens, initiation of a criminal investigation with grand jury suboena powers. I’m not aware of anything that they can do to stop the indictment. I’m not aware of anything within their legal arsenal. Normally after you get the indictment, there’s a motion to dismiss and it’s turned down and you go to trial.

This is not gonna end at that level. Ultimately it’s gonna end up in front of the U.S. Supreme Court. The dean of a law school back East said, ‘Vince, if it goes to the Supreme Court, they won’t accept cert.’ Cert is certiorari. They’re not gonna accept it. They’re not gonna hear it. I said why? ‘They got too much hell over Bush v. Gore. I don’t think they’ll even accept it. In other words, a case will go to trial. I don’t agree on that.

I think they will take the case. I think they’ll take it under submission for months and they’ll issue the longest opinion in the history of the court. We already have four justices most likely against us. Two of them are absolute disgraces to the legal profession, [Antonin] Scalia and [Clarence] Thomas, automatically against us. The other two probably will be against us too. I think we have four perhaps on our side, the swing vote may be [Anthony] Kennedy. I think the nation will be completely divided. I think Europe will be very, very much in favor of a prosecution.

Now you’re saying they’re going to look at it and say, ‘Well you, we just don’t like it.’ Well, they may say that, but fortunately still in the United States of America we’re still not yet in Nazi Germany, although there’s a lot of neo-Nazis out there. You can’t just throw a case out and say, ‘We don’t want this. No.’ It cannot be done. They have to come up with some legal argument. Even some cockamamie argument like they came up in Bush v. Gore, equal protection…What that argument is, I don’t know. I’m anticipating all types of arguments, but this is something that’s still very much alive. I’m not forgetting this.”

Earlier this month, former Governor of Minnesota Jesse Ventura (see here) turned down our suggestion to debate Vincent Bugliosi about the Kennedy Assassination. This is what Ventura said to us when we brought up the idea, “I admire Vincent Bugliosi…Vince is getting older now and I don’t think Vince, having the last time I talked to him, I mean no offense by this, but I don’t think Vince is quite as sharp as he used to be and I would not want to embarrass him. I would not want to do anything to destroy his legacy.”

Vincent says he’d be willing to debate Jesse anywhere and does not think he’s slipped.

“When he came to the house, I said off camera I said, ‘Jesse, why don’t you and I have a debate on a college campus or anywhere else?’ He didn’t say yes or no to it. I said it to his son. He didn’t say yes or no. But I’d be very willing to debate Jesse anywhere. I do not want it in a situation where we’re limited by 15 minutes or a half hour. There’s no reason for having something like that. I just don’t want that. If we can have let’s say a two hour debate, possibly an hour debate, but I’d rather have a two hour debate on a college campus or anywhere else, so we can get into a fair amount of depth, I’d be happy to do that…

As far as me not being quite as sharp, I think again, sounds like I’m boastful, but I think I’m at the top of my game in this book I have right now, the Divinity of Doubt. I don’t think I can do a better job. I almost outdid myself. Many people have said, they’ve used that same word, you’re at the top of you’re game here. So I don’t think I’ve slipped.”

You can find out more information and purchase a copy of Divinity of Doubt: The God Question Clicking here