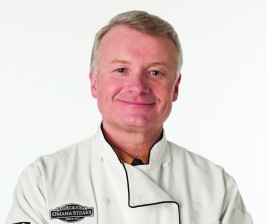 Thanksgiving is only days away and Executive and Research Chef Karl Marsh, of Omaha Steaks, is on board with eating steak for the holiday. Chef Marsh even has his own cornbread stuffing recipe to compliment steak. You can enjoy steak and stuffing for Thanksgiving, Christmas and beyond.

Chef Marsh joined us to talk about some of his favorite recipes, as well as the specialties he works on, as we get ready for the busy holiday cooking season. A chef for more than 20 years, he also told us about some of the new eats that are on the horizon for Omaha Steaks. With almost 100 years in business, new offerings including salamis and roasts are on their way.

You can read the highlights, listen to the entire CYInterview and find the ancho chili rubbed strip steaks and southern cornbread stuffing recipes below:

Chef Marsh agreed that steak was a great choice vs. turkey for Thanksgiving and other holidays coming up:

“We always have beef at my house for the Thanksgiving. I mean, I think it’s a great, it’s another option really. I mean, you know, we do a beef roast, we do a turkey, we also do a ham at my house. I like to have lots of options. Different people in the family have different tastes. It just kind of helps, you know, round out the meal. … I would be all for that [on steak over turkey for Thanksgiving]. You know, I am behind that personally. Steak is good all year long.”

To go along with your steak for Thanksgiving, you might want some kind of stuffing. You can find the entire recipe below, but the cuisine maker tells us a little about his southern cornbread stuffing recipe you can have to make the steak and stuffing combo:

“As far as stuffing recipes that would go real well with steak, I make a southern cornbread stuffing recipe that I think is excellent with steak… For the cornbread stuffing, what I like to do is I’ll bake my cornbread a day before and I’ll chop it up into, you know, the little cubes and what I’ll do is I’ll take some butter and sauté some yellow onions, some garlic. I like to use like some andouille sausage to kind of give it the southern thing.

I use some of that chili rum in there and I use some either turkey or chicken broth and then I will put a little bit of fresh sage in there. I usually like to put some nuts, some pecans, some walnuts that are toasted and then I’ll just put my cornbread cubes in there. I’ll let them soak it up, put the whole thing together, put it in a pan, put it in a 350 oven, usually just cook it for about 30 minutes right before I am ready to serve it and it goes really good with that ancho chili steak.”

Finally, the chef told us about a variety of new foods and product lines Omaha Steaks is working on. One of the interesting things is the ability to cook an entire roast by just taking it out of the package and putting in your oven. He explains:

“We have all kinds of new roasts. We’ve been working on this technology. It’s called rapid roast where you basically cook in the actual film. So these products just go from freezer to oven to plate and usually, you know, well under an hour depending on what the product is. We have several of them. We have a seasoned chateaubriand and all you do is take it out of the box from your freezer and throw it in your 450 oven and 45 minutes later you got perfect medium rare tenderloin roast or chateaubriand that could not be any easier.”

Thanks to Chef Karl Marsh and Omaha Steaks for the following recipes:

2. Generously rub both sides of the steaks with Ancho Chile Rub by dipping them in the rub. Continue until all the rub is on the steaks.

4. Place the steaks on the heated grill and grill to desired doneness. (For a medium rare steaks about 5 minutes on the first side and 4 minutes on the second side.)

5. Remove steaks from grill and garnish with sprinkled chopped chives.

1. Combine all ingredients and mix well.

1. Prepare corn bread the day before using your favorite mix or the recipe below. Cut into 1″ cubes and let dry out overnight un-wrapped

2. In a braising pan melt butter and sauté Onion and garlic until Onion is transparent.

4. Add the broth and bring to a boil.

3. In a small bowl combine the 4 tablespoons butter, milk, and eggs.

4. In a medium bowl, sift together flour, baking powder, salt, and sugar; stir in cornmeal and make a well in center.

6. Do not over mix or corn bread will be tough.

7. Place mixture in prepare pan; bake until top is golden brown (about 35 minutes).

Editor’s note: The good folks at Omaha Steaks sent along some of their excellent products for us to try.

You can learn more about Chef Karl Marsh here.

You can find all of Omaha Steaks products at http://www.omahasteaks.com