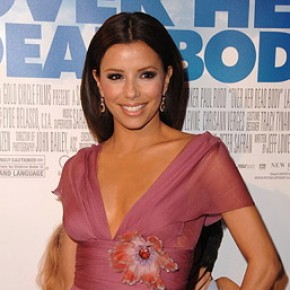 Eva Longoria Parker definitely haunts her husband Tony, but she isn’t dead yet. The Desperate Housewives actress though plays a dead woman in Over Her Dead Body out in theaters today. Her storybook wedding to San Antonio Spurs Tony Parker in France made headlines around the world. She seems in love, confident, and ready to take on whatever is head

Listen to the Eva Longoria CYInterview:

You might need to adjust your volume depending on speakers.

Chris Yandek: Could you ever imagined this is where you would be as a young Mexican-American girl growing up in Texas?

Eva Longoria Parker: “No. Not at all. I never aspired to be an actress or famous or working or being in movies. I am very grateful for the whole experience.”

CY: You go from being told you’re the ugly child to many would say one of the hottest women in the world. When you have someone who says to you man you look hot, do you think about that little girl that was told she was ugly?

ELP: “Yeah. Absolutely. I say thank you. I am very appreciative of it. But it did help me develop other skills. Don’t rely on the exterior beauty and anything that is related to superficiality. The big thing about growing up in that way is I developed humor and I developed personality and develop all these other skills that didn’t rely on beauty because I didn’t have it. Now just to kind of have both is great for me.”

CY: And it definitely prepared you for the Hollywood scene.

ELP: “Absolutely. Especially Hollywood being so rejection in your aspiring phase. I had 100 no’s in auditions to one yes. You have to be pretty resilient to go through that in Hollywood.”

CY: What was appealing to you about playing the role of a dead woman in Over Her Dead Body?

ELP: “I read the script originally for Ashley and when I read the script I fell in love with Kate. I thought she was the funniest thing in the movie. She’s extremely justified in her actions. She got to float and levitate and I just thought how fun would that be to play a ghost.”

CY: You’ve played numerous roles over the years in The Young and the Restless, Desperate Housewives, which is probably your most notable, and in the movie The Sentinel with Michael Douglas. Where does this role go compared to those and what is your favorite?

ELP: “Yeah. I love everything. Everybody asks me that same question. What’s your favorite? What’s your favorite? Action? Drama? Action? Drama? Comedy? I like them all and the way they make people feel in different ways. I love the role of Gabrielle and all the fun she gets to have. That’s why I picked The Sentinel because it was the opposite of Gabrielle. Then I did Harsh Times with Christian Bale and that was a dark intense independent. Now this is something light, fun, and adorable.”

CY: But is there one role where you say yes, that’s exactly who I am?

ELP: “No they’re all pretty much opposite of me and myself. In Young and The Restless I play a psychotic woman. In Desperate Housewives I play a self centered egotistical no family, non-child wanting. Over Her Dead Body I play a bridezilla. It’s all pretty much not me.”

CY: Did you prepare any differently for the role because you had to deal with special effects?

ELP: “Yeah. It was a little different. Technically it’s a little more challenging than most roles. It’s a great experience.”

CY: Do you believe that love takes time to let go of even in the after life?

ELP: “Yeah. It’s definitely what I love about the movie. It starts that conversation between couples. It’s right near Valentines Day and everybody gets to go see it with their date. I don’t think death to us part applies in the movie.”

CY: Now obviously I don’t wish this on anyone, but if you died tomorrow would you want Tony to move on after a grieving period or do you feel you would be like your character in the movie watching his every move from the other side saying how could you ever love anyone else but me?

ELP: “Yeah. Tony and I both say we both haunt each other. I definitely haunt Tony (Laughs).”

CY: Being involved in such a high-profile relationship, do you feel there is a special formula to making it work because it seemed you and Tony really took your time before getting hitched because you wanted this to last?

ELP: “Yeah. We went at our own pace. We’re not really going on anyone else’s pace but our own and we’re happy, we’re both really happy being married, and that’s a big plus (Laughs).”

CY: What was the greatest part of the whole wedding weekend?

ELP “Oh, my favorite part was the kiss at the alter.”

CY: The writer’s strike has given you time off from Desperate Housewives. Have you had a chance to sit back and reflect on the industry as a whole?

ELP: “Yeah, of course. I have had so much time off and Marc Cherry is on the negotiating committee. We’ve been kind of in the fight towards the strike. I completely support them. It’s a fight that needs to be fought. Unfortunately the writers are the first to fight it. I support them one hundred percent. I think they’re reasonable in what they’re asking. I hope the studios come around. I did talk to Marc Cherry and he said he was cautiously hopeful that it’s gonna end soon.”

CY: And I am guessing you’ve kept in touch with all the ladies and you’re ready to go back to work as soon as possible?

ELP: “Yeah. We just saw each other at the SAG awards, so that was a lot of fun.”

CY: As America continues to get more diverse, so does the Hispanic population and the Latino vote in 2008 is going to be very important. Have you decided who you’re going to support yet and what is important to you as we look at this 2008 election?

ELP: “No. I have not decided who I am going to support yet. I am very undecided. I think they are two great candidates in Obama and Hilary and I am definitely going to support the Democratic side of the election, but the work I do is bipartisan. Go out and get the Latino community registered to vote, educate them on the issue, and once the primaries are over I’ll be very…very involved.”

CY: Finally, I am 22 years old, been interviewing high profile people and working in the media since I was 15, but can you tell me something you haven’t told Oprah or any other major talk show host. It doesn’t have to be anything big, but somebody nobody knows about you?

ELP: “Oh God. No. Somebody asked Charlton Heston that one time and he goes it’s not my job. Do your job. I don’t. I mean everybody asks that. I don’t know what to answer to that.”

Over Her Dead Body opens in movie theaters nationwide today. You can find more information at www.overherdeadbodymovie.com.