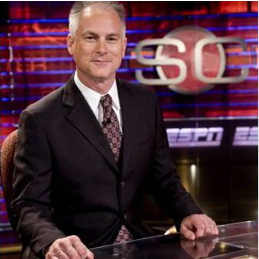 Since the mid-1990s, sports broadcaster Kenny Mayne has been entertaining us on ESPN with his unique humor. Today, he announced on Twitter that he would not be continuing with the network.

Kenny Mayne is one of UNLV’s (University of Nevada, Las Vegas) most famous alumni. A former quarterback on the UNLV football team in the early 1980s, he earned a degree in broadcasting in 1982. In the 1990s and early 2000s, he was one of ESPN’s most famous personalities. Kenny was on the network’s biggest show, SportsCenter. Aside from anchoring the daily sports news, Mr. Mayne would end up having a variety of different positions at the company. One of them had him doing a segment on the network’s Sunday NFL Countdown show, called the Mayne Event. In recent years, he was back anchoring SportsCenter on the weekends.

In 2009, Kenny Mayne joined us on CYInterview to talk about his broadcasting career, his time at UNLV as a quarterback and much more. You can find that CYInterview by clicking here. We wish Kenny Mayne all the best in his future endeavors. His unique sports humor on ESPN will be missed.