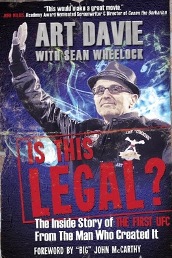 It is possible you would never have heard the names Randy Couture, Chuck Lidell, Ken Shamrock, Tito Ortiz, Dan Severn or Royce Gracie, along with so many others, if it were not for Art Davie. It can also be said that Mixed Martial Arts might not have reached the mainstream in America without him. For years, the entrepreneur imagined putting on a tournament of the best fighters in the world, bringing together men of all backgrounds from a variety of martial arts traditions including boxing and even sumo wrestling.

By becoming a student at the school of the legendary Brazilian jiu-jitsu family, the Gracies, and befriending them, Art was able to convince them that his notion of a best of the best fighters tournament would put their fighting style on the map.

Everything came together on November 12th, 1993, in Denver, Colorado, when the first UFC was held. This coming weekend, 21 years after it all began, Mr. Davie will be inducted into the Legends of MMA Hall of Fame in Reno, Nevada.

Art’s journey and reflections on his dream to see the best fighters in the world battle each other is chronicled in his new book Is This Legal? The Inside Story of The First UFC From The Man Who Created It.

Featured columnist Jay Bildstein joins me for an insightful conversation with the author to learn how the UFC came to be. You can read the highlights and listen to the entire CYInterview below:

Writing Is This Legal has reconnected Art Davie with many people in the MMA community, who he has not spoken with in years. He tells us this:

“I was urged to write this book over the last 10 years a number of times. And you know I think enough time had to pass Chris for a lot of things to happen. Number one, the success of Zuffa in promoting the UFC, which they bought in 2001 to the mainstream, has been a great factor in developing MMA not only for UFC, but MMA. And certainly it’s the reason with their success that you and I are having this conversation. If the UFC had flopped and failed after that, well, we wouldn’t be talking today. So I think the opportunity for me to enjoy the situation that has developed with MMA becoming an international, universal sport is been extraordinaire, a lot of people of course giving me props and credit for what I did starting 25 years ago and culminating on that first show November 12, 1993.”

For many years, Mr. Davie maintained his persistence, belief and desire in seeing the best fighters in the world participate in the tournament he dreamed of. Sharing how he stuck with his dream and did not giving up, he shared this:

“In anything Chris, that’s the theme of the book. It’s my persistence, my dogged persistence in pursuing this goal. I knew it was gonna be a hit. You gotta remember that I grew up with the situation where when you got a bunch of guys together, it was one of the things at some point that came up at some point in the conversation. You know, could Bruce Lee have beaten Muhammad Ali? Could Chuck Norris have beaten Sugar Ray Robinson? So I knew that this was something that had tremendous appeal.

I saw that nobody had been able to figure it out and yet you go all the way back to Pankration at the Greek Olympics and this had become a huge hit back in the past. So I felt like this was an extraordinaire quest. I felt like I was on a mission from God. I was bringing back the glory of the ancient world. … John McCarthy says that I used verbal jiu-jitsu so I beat people up. … I don’t think I ever had the passion or enthusiasm that I did for that project. I just knew it was right.”

Speaking about leaving the UFC behind and witnessing it become a worldwide success, from the outside looking in, the entrepreneur reflected on making peace with it:

“I think the answer to it is that I made my peace with what you’re asking about a number of years ago. I was driving down Sunset Boulevard in my convertible and I spotted a billboard at a stoplight about the UFC, and Randy Couture was on the billboard, and I recruited Randy as a wrestler into the UFC. He was my boy, one of my favorite fighters. And I remember when the light changed I drove on and thought to myself, you know, life is problematic, life is ironic and you know, you could sometimes be riding a wave and you can be dumped or you can ride the wave all the way into the shore. A lot of it isn’t completely dependent on you. It’s dependent upon circumstances, it’s dependent upon luck.

I was, as I look back on it, I am very grateful for the opportunity that I had. You know, I mean, let’s be honest, I mean very few people get that kind of opportunity. I was in the right place at the right time with the right plan and I road it beautifully. You know, do I regret that somebody else was able to pick it up after we were banned and took it even further? Hey, life is funny. I am grateful for what I had though, believe me. Most people don’t even get that much.”

As future UFC events progressed, the rules and regulations significantly changed from the first one. Speaking about the evolution of rules in mixed martial arts, Art offered this:

“The rules and the regulations began to be added starting with UFC 2. John McCarthy and I and later Bruce Blatnick began to add specific rules like time limits, weight classes, judging and gloves. And so by the time that I left the UFC, UFC Japan virtually in January of 1998, 85 percent, almost 90 percent of the rules that were adopted by the New Jersey and Nevada State Athletic Commission, unified rules of MMA had been developed by me as a UFA commissioner. There was an inevitable evolution that the fighters themselves, the fans, the TV networks, the press, the media all contributed to which was in a sense inevitable and I knew that early on quite frankly. So my original concept had to go through an evolutionary process, but I ask you this, what else in life doesn’t evolve before it expires? Absolutely everything in life grows, has to.”

Regarding “Judo” Gene LeBell, a judo champion and professional wrestler who some consider the first MMA fighter of the modern era, Mr. Davie related this story:

“Recently, August 24th of this year, I had the opportunity to be at an amateur MMA show in Los Angeles, the U of MMA at the Nokia Theatre and who I am sitting right next to but Gene Lebell and wife Midge. And of course Gene and I got to talking and sharing and when I was introduced from the ring and they were promoting my book, I mentioned to the crowd that not only did, does this book ring a bell if you want to find out how MMA started and who was involved, but there’s another bell tonight that really needs to be rung and that’s “Judo” Gene Lebell. He’s here tonight, the first ultimate fighter and I had Gene stand up and we did a shout-out to for him to the crowd.”

Finally, the Gracie family was a big part of why UFC came to be what it is. The book gives us a rare glimpse into the Brazilian jiu-jitsu family. Speaking about his relationship with the Gracie’s today, he says this:

“You know I very rarely talk to Royce [Gracie] who I see every now and then. You know, Royce is a sweet kid. He’s a simple soul in my humble opinion, good kid who obviously was in the right place at the right time. I talk to Rorion a couple times a year and his first question always is are you following the diet? Because he wants to make sure that I am keeping my Marine Corp weight which by the way, it’s 146 pounds so I must be doing something right. But I do talk to Rorion a number of times in the year and he and I had a wonderful time at last year’s 20th anniversary show, UFC 167, November 16th, 2013.

We sat next to each other and Rorion said to me, ‘I came out of this with exactly what I wanted. I wanted to get Gracie jiu-jitsu across to the world. I really don’t like what it’s become because time limits to me are, you know, poison.’ He said, ‘But you know? Look what it did for Gracie jiu-jitsu.’ And I agree with him. I think that Rorion did well with this. And his job when he came here to America was to get his father’s art to a larger audience and the UFC was a magnificent vehicle to make that happen.”

You can purchase a copy of Art Davie’s book clicking here.
.
You can find out more about Is This Legal? and Art Davie at his website here.

One Reply to “Entrepreneur Art Davie, Author of Is This Legal? The Inside Story of The First UFC From The Man Who Created It, Talks About His Book, More”