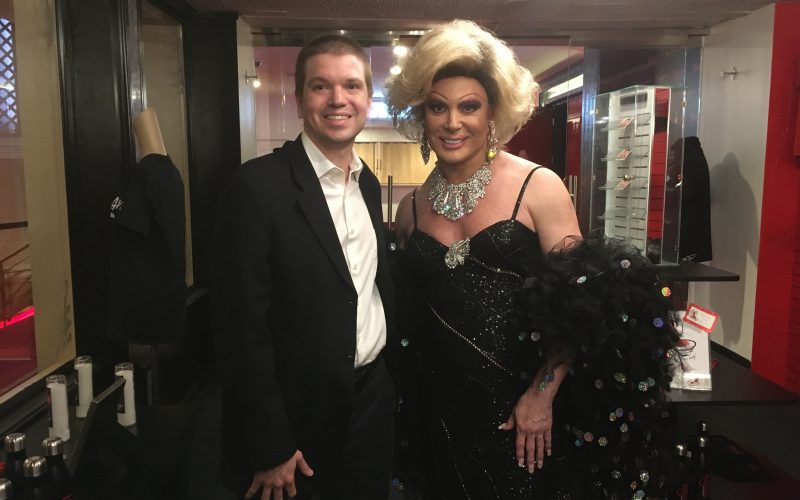 Since September of this year, Mr. Marino has been the special guest host for Legends in Concert at the Tropicana Hotel and Casino. It is the longest running show on the Las Vegas Strip. See our photo with Frank above, as Ms. Rivers, last night.

Minutes after his final performance, last night, as Joan Rivers, performing in Legends in Concert, Mr. Marino, a bona fide Las Vegas luminary, told CYInterview what he was feeling:

“I’m doing great. You know, a little up in the air because I just got rid of a character, Joan Rivers, that I’ve been doing for 35 years. So, it’s a little strange right now, but it’s gotta sink in.”

Though this might be the end for now, perhaps in the future Frank might bring Joan Rivers back. However, he mentions he does not want to be like one of entertainment’s most famous superstars, at least in that respect:

“If I do anything with Legends in Concert again, I will definitely dig Joan up for lack of better words. I don’t want to be like Cher and keep having that farewell tour with Joan.”

So, what was it like to bring his Joan Rivers act to Legends in Concert, the longest running show on the Las Vegas Strip?

“For me, it’s been a ball. It’s been so nice working for somebody, meaning the company Legends in Concert because I just have to show up, do what I do best and not have to worry about the producing side.”

Now that this chapter of his Las Vegas entertainment career is complete, what would the late Joan Rivers think?

“Joan would tell me like she tells me all the time, she goes, ‘My career must be so good because it actually supports two households.’”

You can listen to the entire CYInterview with Frank Marino below, to learn more about him impersonating Joan Rivers, as well as learning about the first time they met, among other topics: