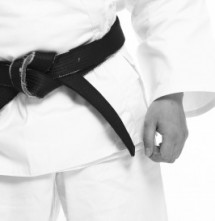 How many of you are familiar with Bruce Lee?

You might find that an odd question for an article about economics. Perhaps, one of the great downfalls of our current era is that we fail to make connections between seemingly dissimilar fields of endeavor. That would make for an article in itself.

Bruce Lee was a famous martial artist. He came to general prominence through his work on television and in the movies. His most famous film, Enter the Dragon, is a martial arts classic. Bruce Lee died in the 1970s, at the age of 32, yet his legacy lives on.

Lee was not just a superb martial artist and showman, he was a philosopher and the founder of a martial arts system called Jeet Kune Do. If we open our minds, this work can provide wonderful clues into mediating the differences between economic theory and economic practice.

The Jeet Kune Do emblem embodies the martial arts philosophy put forward by Lee. It can roughly be summed up as “Using no way as way.” In other words, do not be stuck on a particular method of doing things. Instead, do what works. In martial arts this might mean picking a punch from boxing, a kick from Tae Kwon Do and a throw from Judo and combing them together into a meaningful defense against an attack.

In contrast, a boxer would be limited to punching only. Kicks and throws would be unavailable to him. If the boxer is in the boxing ring, that would be appropriate. If he is out in the real world, in a circumstance calling for legitimate self-defense, he is unnecessarily limited by the dogma of the system he has trained in.

And so it is with economics. Economists tend to come from particular “schools.” They adhere to certain world views. These views have often been informed by the works of revered political economists, who have been studied for years.

Studying the work of great economists is of the utmost importance when it comes to understanding how a society functions within the context of commerce. Yet, if we become unswerving followers of a school of economic thinking, dogmatically adhering to its tenets, we deprive ourselves of the ability to pick and choose what ultimately works.

There is always a gap – sometimes a large one – between theory and practice. In the realm of economics, we should follow the example of Bruce Lee, weaving together what works best from different schools of thought in order to create the most workable and worthwhile method of economic planning, analysis and understanding available to us under the circumstances.