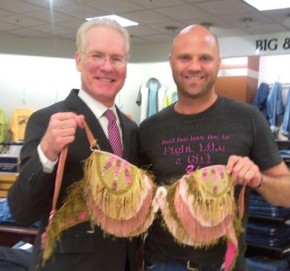 At a breast cancer awareness event, put on by the Susan G. Komen Breast Cancer Foundation, Dusty Showers had no idea a bra would lead to a future appearance on Oprah. Mr. Showers says he was going through a divorce and it was people from the breast cancer community that gave him a reason to go forward with his life.

Listen to the entire CYInterview with Dusty Showers:

Today, Dusty Showers is known as “the man in the pink bra.” He’s used that piece of lingerie to draw attention, anywhere he can, to breast cancer awareness – besides doing extensive work for the cause. Dusty recalls how it all began.

“I found myself in that community, the breast cancer community and they kind of took care of me. What had happened going into that next event which was in 2006, my team was a bunch of men and they get out of a suburban covered in bras and they’re wearing bras over their shirts. They say, ‘Dusty, you’re gonna wear this.’ They lift up a pink bra. I say, ‘That’s cute, but I don’t think so.’ They said, ‘No. You’re gonna.’ I said, ‘Alright, I’ll tell you what, I’ll wear it one time and that’s it.’ So I wore it one time back in 2006 and then they made me do it again in 2007. Then somebody said, ‘I’m gonna make you one. If I make you a bra, will you wear it?’ I said, ‘Well, that’s kind of weird, but alright fine, I’ll do it.’ So it all kind of snowballed from there. Since then, I’ve had more bras sent me than I could ever imagine.”

Though many think of breast cancer as something only impacting women, that’s actually not true. Mr. Showers says that over 3000 men are diagnosed with some form of breast cancer each year and with 300 people dying from the disease yearly. It might sound surprising to people, however, males need to do breast self-examinations, just like women.

“Just about 3000 men will be diagnosed with breast cancer each other. It’s really not something that many people think of, but it is possible. So just like women, you can actually have a mastectomy so that the breast tissue of a man is removed. Give or take around 300 people, just under 300 men will die each year from breast cancer. I’ve personally seen it, but not in any kind of numbers compared to that of women. It is something that men should definitely be aware of and just like women you can find lumps…They clearly need to be aware of what’s going on with their breasts. As funny as it sounds, men do need to check that out.”

Mr. Showers founded an organization, The 2nd Baseman. Though the majority of its members are women, there are male members who have united to fight breast cancer. Dusty says there aren’t enough men speaking out and getting involved in the cause, which continues to affect primarily women.

“I know some amazing men that are involved in the cause, but I think they [men] have to be aware of exactly what is happening to the women. Granted the men do get breast cancer, but my main focus is on the women. I was under the impression like I said before seven, eight years ago that the breast cancer thing was under control. We’ve got it taken care of. Everybody is wearing pink and they’re smiling and raising their hands and saying, ‘Hey, I’m strong and I’m a survivor.’

But the reality is that they’re getting their breasts removed and granted many times they can get them reconstructed, but the reconstruction is an extensive, extensive painful process and you still don’t come out with, it’s not like an enhancement. It’s not what a lot of men think that it is and it’s financially devastating…I think it’s important that men know that we don’t have a grasp on this and we need them to support the women both financially and just coming out and doing physical things to help out.”

Dusty Showers is pictured with Tim Gunn in the photo used for this interview.

You can find out more about Dusty Showers and his breast cancer awareness organization at http://www.dustyshowers.com