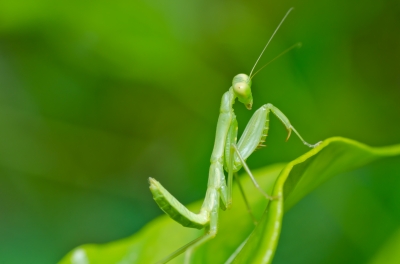 Duly noted, no one voted
And the Mantis sat upon the bar
Gazing at the gal who wanted to be a star
“Whisky and Water,” he ordered

And that is the disordered life
Glugging and chugging, instead of planting a flag
Wishing instead of working,
Just drinking and shirking

In a slur the Mantis demanded, “Another double!”
Here comes trouble!
And a bubbly blonde sidled up to him
“Come here often?” she asked with a grin

“Hmmm,” responded the Mantis, wiping his chin
And then he let out a sober shout
“It’s hollow if that’s all there is.”
“We can do better through will, if the will is His!”

At that moment the bar went silent
Sad eyes and sagging faces focused upon him
“We want to win with spirit and grace,
Yet look at us, we’ve become a sloppy disgrace.”

And with that the assembled knew
They knew what they had to do
Booze was poured onto the floor
Then, slowly, one by one, they walked out the door

Other denizens of that saloon made changes too
Some did tai chi, others knitted
Some did feats of daring do
Yet, and this is big, they all improved at what they did