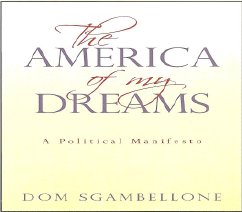 As a new Congress took its place last week, everyday Americans, nationwide, continued to be concerned about the country’s future – particularly when it comes to the economy. Consequently, some people might wonder if a new political party could emerge, giving the electorate a real choice besides the Democrats and Republicans and in so doing make for some substantial change in Washington, D.C.

Author Dom Sgambellone’s book titled The America of My Dreams: A Political Manifesto discusses his frustration with, what he perceives to be the corruption of, both political parties and what he believes needs to be changed in government going forward. Dom came to this country from Italy in 1963, earned his MBA Degree from Seton Hall University and declares himself a pioneer of self-insurance in Rhode Island. He has also been a guest at the White House. Mr. Sgambellone wants people to know that he has no aspirations to run for political office, but he is concerned about what’s in store for future generations in the U.S.

Dom joined myself and international columnist Jay Bildstein for 40 plus minutes, touching on many topics including: what it will take to engage the American people in working toward the creation of a strong third party, how American soldiers in numerous countries like Germany and Japan should be brought home, healthcare, various economic topics and much more.

Here are some highlights:

As regards having a strong third party, Jay asked Dom what it will take to engage the American public.

Dom said, “It is people like me and you that have to get the message out there and absorbing people to just really get involved, just make your voice be heard, even with the existing representatives. Make sure that you know what’s going on and you are informed.”

Looking at the best way for Americans to help the state of the economy at this given moment, Dom says the best thing to do is buy American and take vacations in the states to keep the money in the country.

“One of the things that we as Americans can do to help the situation financially is to try to buy American made products…I reached the point that if I don’t need an item badly and I see it’s made elsewhere than the United States, I don’t buy it. The Americans can take a vacation here in the states instead of going abroad.”

In regards to his vision for the American People’s Party, which is the theme of his book, Dom says people have to become engaged and get together if we’re ever going to see real governmental change.

“We have very severe challenges ahead of us, but one alone, I alone or you alone cannot do it. We need everybody to get together, bend together and essentially take the bull by the horn and start cleaning up, starting from Washington and ending up in each and every state in cities and towns. Well, that’s why the idea of this new American People’s Party.”

You can find out more about Dom Sgambellone at his website and The America of My Dreams: A Political Manifesto at his official website: http://www.theamericaofmydreams.com/

2 Replies to “Dom Sgambellone: Author with last name sounding like scam/baloney calls out American political system on just that”