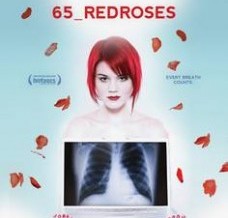 65_RedRoses is a film documentary about a woman named Eva and two friends she meets online, all of whom are trying to cope with cystic fibrosis. The story covers the daily struggles of people with this disease, which currently has no cure. Cystic Fibrosis primarily affects a person’s lungs but it can also impact other organs like their pancreas, liver and intestines.

We are pleased to be joined by the director of 65_RedRoses, Phillip Lyall, to discuss his documentary which works to educate people about the disease. May is Cystic Fibrosis month. 65_RedRoses airs this Thursday night at 9:00 PM EST, on the Oprah Winfrey Network [OWN].

You can read the highlights of our conversation, as well as listen to the entire CYInterview below:

Speaking of 65_RedRoses, Phillip shares his experiences and thoughts on doing a documentary about Cystic Fibrosis:

“We show the struggle of someone trying to live her life. You know, it’s an invisible disease and it’s a young person’s disease. So you look at them and they don’t look sick, but it’s something that’s internal and so I really think that it, the film shows a struggle of you know going to the hospital, living that life and then having to go back out into the real world and trying to live your life like a normal person. So I think we do capture some of that.”

Though there is currently no cure for Cystic Fibrosis, Mr. Lyall stresses the importance of people becoming organ donors to assist in giving someone with a disease, or any health challenge calling for an organ transplant, a chance at a longer life:

“It is a genetic disease right. So what they know is they are able to isolate the gene, but they’re not sure how to eradicate it. So the only thing they can do right now is obviously people can be tested before they, you know, give birth to their child while they’re pregnant. They can go in and get tested for the Cystic Fibrosis gene and then from there, of course, they can make a choice on whether to go on with the pregnancy or not…The organ donation is the huge thing because especially in Canada, there is a very, there’s a lack of organ donors and there’s a lot of people waiting on the list, especially a lot of young people, where people think it’s older, there’s actually a lot of young people waiting for organs, so for us it’s kind of like, oh my God, everyone should be an organ donor regardless of your religion or what you believe in.”

In the documentary, social networking is shown being used by three women sharing their experiences of dealing with the disease. The documentary filmmaker gives his thoughts on how this kind of communication has changed the way in which people are dealing with health challenges:

“This was sort of the B, C plot of the documentary is that while she’s [Eva] waiting for lungs, she’s isolated in this room and she can’t talk to other CF patients in person because of the threat of spreading infections, she went online because she’s a very social person. She needed that connection and also even though she had family and friends, all of this amazing support system, they don’t have Cystic Fibrosis, they’re not waiting for a transplants. They do not understand the full impact of what she’s going through.

So to go online and it was this live journal site at first where she’s started talking to people, she’s posting about her feelings, her wants in life and these are young girls, these are women that are at a point in their life where they’re just growing up, they’re coming out of university, they’re falling in love for the first time. So it was such a beautiful thing to see how she connected so deeply with people she’s never met before.”

65_RedRoses airs Thursday night at 9:00 PM EST on the Oprah Winfrey Network. You can find more out about the documentary at www.65redroses.com.