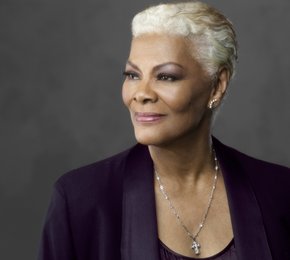 Tonight in Las Vegas, music legend Dionne Warwick begins a limited run of shows, for four weeks, at the Jubilee Theater at Bally’s Hotel and Casino. For 57 years, the singer/songwriter has entertained the public. As one of the most charted female vocalists of all time, she has performed around the world, including for presidents, kings and queens.

In addition to her limited Las Vegas engagement, Dionne will be releasing a new album next month – after having taken a few year hiatus – titled, She’s Back. If that were not enough, she will be receiving a Lifetime Achievement Award from the Grammys in May.

This week, Dionne joined us for a CYInterview, to speak with us about her new album, Las Vegas run and Liftetime Achievement Award, as well as to look back at some of the highlights of her famed music career.

Speaking about her limited time residency here in Las Vegas, at Bally’s Hotel and Casino at the Jubilee Theatre, Dionne Warwick told us this:

“Basically, doing what I do. And hoping that those who will be in attendance are there for the same purpose to hear the songs that they found love over the years as I have with a few surprises, so new material and just enjoy the musical evening.”

Reflecting on some memories from her 57 year music career, the Grammy winner told us this:

“Every single concert I’ve done and the places I’ve been fortunate of traveling to. They all stand out. … My first trips were to Paris, France, that’s quite something to think about. You know, it’s wonderful. And then to be able to travel the entire globe actually for the past 57 years now has been an absolute pleasure and I look forward to continuing to do so as long as I’m able to and as long as those who have supported my career thus far are still wanting to see me and hear me.”

The music legend is receiving this year’s Grammy Lifetime Achievement Award at the Microsoft Theater in Los Angeles on May 3rd. Giving her thoughts on the honor and if she has thought about her speech yet, she said this:

“It means an awful lot, you know, to think that the academy has thought that my body of work deserves recognition. I’m thrilled about the fact that they have decided to honor me in this fashion and I have not thought about what I will say. I usually do not write anything down. If I do, I usually forget to bring it with me. So, I generally speak from my heart.”

On releasing a new album next month titled, She’s Back:

“I took about five and a half years without recording at all and my son Damon Elliott decided, ‘Mommy, it’s time for you to get back into the studio and give these people some music to hear.’ And I finally had to give it some thought and said, ‘You know, maybe you’re right.’ And on top of that, you know, I was walking in the street, going through airports, going to the supermarket, I’m practically accosted by people asking me, ‘When are you gonna record again? We need some music from you.’ And I finally said, ‘Well, ok.’”

On what it was like to work with Elton John, Stevie Wonder and Gladys Knight on the song That’s What Friends Are For:

“Absolutely amazing. Those are my babies, my friends. And when you’re engaged with your friends doing anything, it’s always a joy. “

What has she learned in this life?

5 Replies to “Do You Know the Way to — Las Vegas? Legendary Singer/Songwriter Dionne Warwick to Perform in Limited Run at Bally’s Hotel and Casino: Talks with Us about Her Magnificent Career, Past and Present”