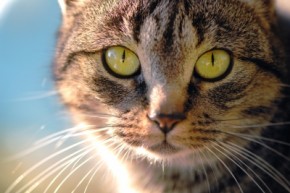 Do cats swim? I have never seen a cat swim, not even on television or in a movie. I have, on the other hand, seen dogs swim. If cats do not swim, why don’t they? If cats do swim, why haven’t they gotten more press about it? And hey, cats do like fish. It would seem swimming would come in handy for them.

Who invented the jelly donut? Many people find jelly donuts, or any donuts for that matter, delicious. However, while this filled pastry is tasty, it should not be used as a dietary cornerstone. Actually, I don’t know whether a donut is technically considered a pastry, but I do know eating too many of them will make you begin to take on their appearance.

Many people love cheese. Ironically, there are times when something gives off a foul odor and some of those same people will remark that it smells like cheese. Hmmm. Why would anyone find something delicious yet at the same time describe nauseating odors as smelling similar to it?

Dogs go bowwow. Cats go meow. Pigs go oink-oink. Roosters go cock-a-doodle-doo. What do humans go? They might go eat jelly donuts or leave a room that smells like cheese or go and eat some cheese, but what is the quintessential human sound?

Why do lots of jokes begin something like this, “A man goes into a bar. Sitting there are an astronaut, a fireman and a nurse.” Why is it frequently a bar the man goes into? Why don’t the jokes start, “A man walks into the astrophysics section of a university library…”?

Lots of words, once in fashion, seem to have ended up on the ash heap of linguistic history. One such word is “hullabaloo.” Hullabaloo is synonymous with commotion. Commotion is still a word that gets a decent amount of use. Hullabaloo, however, has gone hulla-bye-bye. You would think people might make more of a hullabaloo about words disappearing from use. Whatevs.

Yes, yes, “whatevs,” a somewhat contemporary, maybe cool, maybe not, way of saying whatever. Will whatevs go the way of hullabaloo? Will people make a hullabaloo about it if it does? My opinion, whatevs!