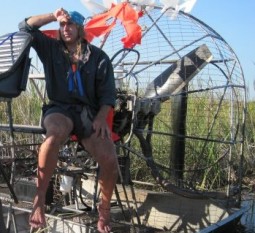 For over 20 years, survival specialist Cody Lundin has decided to live barefoot, at least in every circumstance that doesn’t absolutely require footwear. On occasions when some kind of covering/protection is needed for the human feet, however, the dude abides. Cody forms one half of the Dual Survival team, entering its second season on the Discovery Channel. The show airs Friday nights at 9:00 PM.

Going shoeless has increasingly caught the imagination of some athletes, weekend warriors and the general public. Vibram – a company known for manufacturing rubber outsoles for shoes – makes a product called FiveFingers, a type of foot-glove. Barefoot running has gained more attention. Many people have hurting feet and legs – suffering with things like plantar fasciitis and knee pain – and are in search of ways to alleviate their pain.

The bestselling book by former Men’s Health contributing editor, Christopher McDougall, Born to Run, features a barefoot runner, “Barefoot Ted” McDonald. Decades ago, Bernarr Macfadden – a prominent personality in the physical culture movement – was a proponent of going barefoot. Are there health benefits to shoeless-ness? Whatever the case, Cody Lundin is an interesting individual and not just because he goes unshod. Listening to the interview is well worth it.

Focusing on his shoeless lifestyle, Cody explains why he has made the choice to go foot commando over the last two decades.

“It’s just a personal lifestyle choice I made a long time ago and I feel more comfortable doing that. A lot of native peoples did that. It’s not like I’m not wearing flip flops when I go into a restaurant. It’s not worth being celibate over. If you can’t take your girlfriend out to dinner, you have to compromise. I need to wear flip flops to get on a plane. So 99 percent of the time I’m talking to you barefoot, shorts and a t-shirt right now from an office in Yavapai County in Arizona. So it’s a choice I made a long time ago. There’s various reasons for that. I know it seems freaky, but shoes are fairly new on the scene if you look at human history and time is on my side.”

Traveling to certain places across the globe including South Africa, Thailand and Mexico, with Dual Survival partner Dave Canterbury, Cody notes there are certain conditions where his barefoot lifestyle just isn’t feasible.

“In Peru, for example, for Dual Survival season one, I had to make a pair of sandals out of a Volkswagen tire because the desert was so nasty and it wasn’t nasty heat, it was very sharp volcanic rock and these little bastard cactuses that were literally everywhere…Here’s where I would put on something to cover my feet probably like a sandal or a flip flop and that’s very, very hot ground temperatures, that’s extreme cactus or just acres and acres and acres of lava or in the case of a few shows on Duval Survival, I’ll put on three pairs of non-threadbare wool socks for snow and ice and they really work well.”

Pop-culture-wise, perhaps, Mr. Lundin’s are some of the most famous bare feet since Fred Flinstone.

“Well, damn Chris, I’ve never heard that since you just said that. But I’ve never really thought about that, but maybe so. We’ll see. We’ll see how season two does and I’ve been doing it for real. You’ll notice there’s books about barefoot running now. In the last few years, a lot of the big shoemakers are going for shoes that really aren’t shoes. So maybe we’ve started a trend and that trend will probably continue.”

Before traveling to somewhere on the globe you’re not familiar with, Mr. Lundin says preparation is key, particularly if you go missing. He tells us what the most important things people need to do are, prior to visiting a place they’ve never been before. You never know what can happen on a trip or vacation.

“In a common modern survival scenario, one of the most important things your listeners can do is leave a game plan about where they’re going and when they will be back with a couple of people that love them back in town. That said, when you’re out there, most scenarios are a third party rescue. This game plan denotes where you are, so if you get compromised and don’t make it back from hiking or skiing or whatever, search and rescue knows where to go to look for you. That’s critical.

The other things you’d want to deal with is hypo and hypothermia and of course dehydration and a real easy way to deal with that is knowing the seasonality of the place you’re going, having the appropriate clothing for the weather, checking the weather and having a way to signal for rescue, stay dry, stay warm or stay cool depending on the scenario and again really activate that search and rescue system which differs from every state in our union so you have someone looking for you if you do get compromised.”

Being that many Americans are currently in survival mode, at least economically, I posed the following question to Cody. “The American economy and social climate for many right now is survival, but many people lack self-sufficient skills. Looking at these challenging times in America, what comes to mind and what’s your general advice for Americans regarding survival in everyday life?”

“Thank you for asking. That’s the most important question I’ve heard in a long time. Don’t assume it can’t happen to you. Be prepared. Take duct tape or whatever for one weekend in your house or apartment and duct tape over the appliances and the switches so that you pull your own home off grid and see where it hurts the most…Figure out all the things that you’ll figure out.

How do we heat and cool this place when it’s off the grid? Where’s the safe water coming from? How do we disinfect it? Where do we put the poop when the toilet doesn’t work? What about that canned food? All tons of lighting for the night, transportation, communication, hygiene, etc, all those things that Chris and myself and everyone else take for granted when the economy’s up and running and the power is functioning, might not be there. So it’s important to do a camping trip in your living room, figure out what hurts your family the most and buy excess supplies to have those needs taken care of for at least 72 hours, three days or maybe even a week or more.”

Lots of Americans are having to do more with fewer resources. Mr. Lundin says he is definitely one of those people who believes you don’t need a heck of a lot to be happy.

“I’m all about the more you know, the less you need. Knowledge is power. It’s lightweight. It lasts a long time. It doesn’t rust and it’s a hell of a lot of fun just being responsible, being a responsible citizen on the planet, simplifying life, doing more with less and enjoying the gifts that we have with life. It’s excellent to simplify. It’s just a lot of fun.”

Finally, Cody gives a preview of this weeks Friday night episode of Dual Survival, shot in the Everglades. Speaking of the wildlife spot in Florida, coincidentally, there is a Miami/South Florida based show called The Glades, which uses the Everglades as its backdrop. It returns for its second season on A&E in June. However, you’re going to see the real Florida Everglades on the Discovery Channel this Friday night.

“Well, we shoot a lot of film. We shoot many, many, many hours that never hit the airwaves. So I’m not sure what to expect because we haven’t seen the final product. But you’re gonna expect more a traditional scenario with two lost air boaters needing help. So here we have a SAR, scenario, search and rescue, instead of having a self-rescue scenario, which is much more realistic. You have two people in a pretty far boating area that are trying to get their needs met while being active and settling for rescue, which is just what would happen to some campers or hikers or what not in the Everglades if they got compromised…You’ll see lots of mud and guck. You’ll see some scary places where there were some big reptiles that were hanging around and general mayhem.”