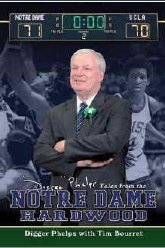 Listen to the Digger Phelps CYInterview:

CY: What was it like to look back and put all your memories together in Digger Phelps Tales From The Notre Dame Hardwood?

DP: “Well, it was a dream come true. Back in 1965 I coached Saint Gables High School. I told the head football coach Are Parseghian at Notre Dame that one day I wanted to be head basketball coach. Six years later I was head coach at Notre Dame at the age of 29.”

CY: What was it like being a basketball coach for 20 years at Notre Dame when football at this university is looked as the number one sport and basketball always being second?

DP: “Well, I thought we did a great job at marketing basketball. I think Notre Dame has done a great job as our fencing and girls soccer teams just won national titles. With the success of football you can do it in other sports as we found out in the 1970s and 1980s when we marketed basketball. We became number one in January of 1974 in college basketball and the football team knocked off Alabama to win the national title in the Sugar Bowl. It really is just how you go out and sell it.”

CY: When you became the coach at the University of Notre Dame your first season it seemed you tried your best to talk to the students and get them to come to the games as you say in your book. Tell me about that.

DP: “Well, the student body is all part of what life can be like as a student athlete. The mystique at Notre Dame was that the athletes would live in the dorms. They really were part of the home crowd. We beat San Francisco when Bill Cartwright was there and NBC gave them the most valuable player. The most valued player was the student body.”

CY: On January 19, 1974 you defeated John Wooden’s UCLA basketball team 71-70 in what is proclaimed the greatest Notre Dame college basketball game ever that you talk about in the book. Give me your memories of that game.

DP: “Well, on Wednesday before the game we practiced cutting down the nets. We wanted the players to believe they could win the game. So Wednesday, Thursday, Friday we practiced cutting down the nets. Then we won the game on Saturday. It was probably a turning point for college basketball because it became a TV marquee. ESPN wasn’t even born yet. We came from 11 down with 3:22 to go and went on a 12-0 run. Gary Brokaw took the game over, but without him we wouldn’t be where we were. He made two key jumpers that cut it from five to three then three to one. He got the assist on the shot that won the game with 20 seconds to go.”

CY: You took your 1977-1978 Notre Dame basketball team to the final four and lost 90-86 to Duke in the semifinals and lost the third place game to Arkansas. Tell me about what you remember about going to the final four with that team and how special it was.

DP: “Well, that was probably the greatest thrill of getting there. It helped build that program by getting to the final four. We had a tough game against Duke, but of course had a consolation game with Arkansas that was a very good team coached by Eddie Sutton. That was one of the last years they played the consolation game because it wasn’t a good feeling if you lost two games because it felt like you had a lousy season. It was a great moment in Notre Dame Basketball to make it to the final four. The year after that we lost in the regional championship to Magic Johnson who would beat Larry Bird for a national title. 1978 and 1979 were two great years for Notre Dame Basketball.”

CY: How do you think college basketball has changed from when you coached in the 1970’s to 1990’s to today?

DP: “There are so many three pointers. I think they need to move the three point line out. I think they should move it out to 21 feet which is the international line. There should be more penetration and post play. There should be more balance in the game I think as you have seen. There are a lot of teams shooting three pointers. If you make them fine if not then no. I think Illinois shooting five or six for nineteen in the first half killed them in the 2005 National Championship game. They shot 40 three pointers and forgot how they got there with the ball in the paint. I think it is time they move the three point line back to the international line.”

CY: Today you are an ESPN analyst during the college basketball season. What’s it like having to work beside Dick Vitale and others at ESPN and the learning experience you’ve gained?

DP: “Dick Vitale belongs in the hall of fame. He is the one who has marketed college basketball and has been the ambassador for college basketball. He has made college basketball today what it is with the student body on campus. He is like a rock star. We are the Rolling Stones and he is Mick Jagger. Without him the TV wouldn’t be where it is today.”

CY: In your coaching days you know what a good upset is all about. What are your thoughts on the upset minded teams of today like a Vermont, Wisconsin Milwaukee, Bucknell, and others, and do you think these teams are finally getting the opportunities to recruit more talent with these upset victories in the NCAA tournament and compete?

DP: “Well, I just think you are going to have those upsets every year. You saw it two years ago when you saw Nevada get to the sweet 16. Of course UAB also upset Kentucky the number one seed last year of all of the number one seeds. I just think the game is always going to have upsets. You are always going to see a 5 vs. 12 upset like Wisconsin Milwaukee over Alabama this year and Boston College. I think it’s all part of the game. It’s great to see a team like Oakland with a losing record when it wins its conference tournament and getting to go to the NCAA tournament.”

CY: How did you end up working for President Bush’s administration in 1992 and 1993?

DP: “I have known President Bush Sr. since the early 1970s. When I got out of coaching at Notre Dame I went to work for him in the White House. I ran a program out of the drug office called Weed and Seed that basically helped get some of these neighborhoods back in order. Some of the things we basically did were mentoring in schools. We started safe havens from 3:00 to 9:00 PM at schools. We tripled the gun related sentence in certain areas from five years to fifteen years. We established community policing and neighborhood watch groups, and we also helped with economic empowerment to bring more jobs into the neighborhood. That was a great experience trying to make a difference in people’s lives and letting them know there are other options in the game of life.”

CY: Besides 2005 National Champion North Carolina, who else do you feel will be a surprise or contend next year?

DP: “I think anything can happen next year. Uconn will be good if those guys stay together. I think Marcus Williams proved he could be one of the most premiere point guards in the country next year. Duke could be good of course with JJ Redick coming back. I think one of the sleeper teams next year will be Villanova. They are going to be very talented and very good. I think GeorgeTown will surprise people because they will only lose one player. I am looking forward to seeing how the Big East is gonna work next year. The bottom four teams in the Big East won’t make the conference tournament. You are going to see a lot of coaches being fired because they didn’t make the Big East Tournament. That conference will be a dynamite conference next year and get eight teams in the NCAA tournament.”

CY: Finally, do you think there is ever a chance that you’d coach again under the right circumstances?

DP: “You never say never. I don’t see it happening. I am very happy doing what I do for five months with college basketball. I love working at ESPN. I have become a basketball fan. I just think it’s a great lifestyle for five months and then the other seven months I do what I want to do. I help fix up schools here in South Bend in the summer and get involved with the mentoring programs. To save education in this country we need to get more people involved in the community.”

You can purchase a copy of Digger Phelps Tales From The Notre Dame Hardwood at the following link: