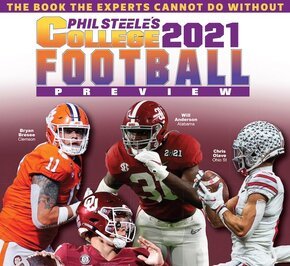 We are less than two weeks from the beginning of the college football season. Phil Steele has been putting out a preview magazine on the sport for the last 27 years. Phil Steele’s 2021 College Football Preview is over 300 pages and has information on all 130 Division I teams.

In keeping with yearly CYInterview tradition, Phil is back for his predictions on the upcoming NCAA Football season. He told us that he believes Oklahoma will win this year’s national championship:

“I actually think they have a top five defense this year to go along with that number one offense and that’s why I’m calling for Oklahoma to win their first national title since 2000.”

Some of his other national title contenders include Ohio State, Alabama and Clemson:

“Ohio State’s gonna be a double digit favorite in every game. So they are a legitimate national championship contender. … They’ll [Alabama] be favored in every game. Alabama’s toughest test’s gonna be at College Station on October 9th and then the SEC Championship Game against Georgia. … Clemson will be favored in every single game this year including the Georgia one to open up the season. Their toughest two tests are probably North Carolina and Miami of Florida, whichever one wins the Coastal, playing them in the ACC Title Game.”

Outside of the four teams mentioned above, Notre Dame is another team Phil believes could reach the College Football Playoff:

“My main set of power ratings that Notre Dame, calls for them to go 12-0. Most of the other ones call for them to have one or two losses with that schedule they play, but yes, they are definitely a dark horse.”

Out of the Pac 12, Washington could also be a team that has a chance to play for a national title. They are his surprise team of the year:

“I’ve actually got Washington favored in all 12 of their games. So if they were able to play up to my level of expectations and run the table, they are not gonna be in anybody’s preseason top 10. In fact, they are gonna be picked second in the Pac 12 North by the media. But I think they got a chance of getting in there and getting into the playoff.”

“I do think Mississippi State gets back to a bowl game this year and back to a much better record.”

Here in Las Vegas, the sports editor told us how the University of Nevada, Las Vegas will fare this year under second year head coach Marcus Arroyo:

“They’ll be an underdog in maybe 10, maybe 11 of their games. The Utah State game, probably their best chance of getting a win at home, maybe they can steal one in New Mexico, but I think this is gonna be really year one for Coach Arroyo and I think the chances of them getting to a bowl game are very slim.”

You can purchase Phil Steele’s physical or digital version of his college football preview magazine at www.philsteele.com.