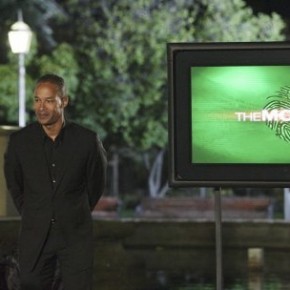 Extra co-host Jon Kelley joins Chris Yandek to talk about his hosting duties for the upcoming season of ABC’s The Mole.

Listen to the Jon Kelley CYInterview:

Chris Yandek: How will the season of The Mole be different than past seasons?

Jon Kelley: “Well, first off it will be different in the fact that it’s all new locations. We go to South America. We’re in Chile with beautiful, spectacular waterfalls. We’re in Argentina. We travel around South America and it’s a really…really cool adventure because we get a slice of what that’s about. The producers this year have really made it a point to give us a slice of that culture and everywhere we are at. It will be different from where we are at, of course 12 new players. It will be different too because the Internet has changed since the game came out and started back in 2001.

It’s gonna be very Internet friendly where it can be interactive. You can do things through your cell phone. You can do things online. In the past they had some of the quiz questions online, but some of the things even if you watched the show you may not know the answer because it wasn’t part of the show. This year it is the exact same quiz that the players will take. Every week you’ll have the exact same ten questions so everybody at home can play along. As far as how this is different, one of our executive producers Clay Newbill said this year is the bionic mole. Bigger. Faster. Stronger. Better than ever.”

CY: How do you think you’ll be different than Anderson Cooper who used to host the show?

JK: “I am a big fan of Anderson Cooper. I liked his style. I liked the way he did The Mole. I think he was clever, smart, but he could be self-deprecating so it was a perfect mix. As far as being different, I didn’t really go into it with the approach of how I am gonna be different or similar. I just wanted to go in and kind of organically let the show take its course and hopefully as the tour guide naturally be a part of it. I am not sure. I think that we might wear different suit sizes, but this is the crazy part, someone told me they saw a blog online that some people thought, got the idea that we looked very much alike. They wrote on the blog someone told me, brothers from another mother. If people are going to get us mixed up I’ll clear it up right now. If you look real closely, I have a little bit of freckle under my right eye so. If you do on an occasion happened to think it’s Anderson, oh wait is that Jon? Look for the mole. You’ll know it’s me.”

CY: How does hosting a reality show differ from being a sports anchor or being a co-host of Extra?

JK: “That’s a good question man. I’ve been asked a lot of stuff, but I’ve never been asked that one. How does it differ? Well, when I did sports, I worked in Chicago for eight years during all the Bulls championships. It was live and it was everything in the moment. It’s also more cutting things and having it set. You went on air most of the time having it all laid out. You kind of knew what you were doing. You had your beats down and a certain amount of time. The reality part of it is you go in with an idea of what might happen. There are certain missions that are set up. There are certain game plans. There are certain things that we do in advance, lay out, but it evolves, it changes, it grows. The great part for me was like the players, like the fans at home I got to play along with this. I never knew what was gonna happen next.

Throughout the show I was never told who the mole was. Just like anybody else, I was in the dark on that. The reality is that it’s a lot going on, but it’s a great chance because you get to have an interesting, smart, intriguing, adventurous game, and it’s big. When I did sports, there were events that it was usually coast to coast. This is international. There is big traveling and a chance to really watch something that was anticipated by a lot of people. Live vs. tape, that was different. It just became something that I had no idea who these players were prior to it and as we got going in it again and you watch them change day to day as well.”

CY: So if you could do one reality show whether it was Dancing with the Stars, Celebrity Apprentice, The Mole, or anything else, what would it be?

JK: “For me I’ll probably sound bias, but I just think this show is so unique and diverse. The Mole would be a great one to be on because it has a little slice of everything. It has the adventure. It has the intrigue, the drama, you get comedy but you’re challenging yourself physically as opposed to some reality shows about being voted off or someone else voting and deciding your fate. You’re in complete control of that because there is the quiz. The quiz every week is on the identity of The Mole. The player with the lowest score is gone. It depends if you stay on the game and I dig that.”

CY: Finally, tell me one celebrity you’ve come across that we would say is a real normal person from your time at Extra.

JK: “I can tell you there is a couple of people that as far as the biggest celebrities on the planet. The coolest people, Will Smith. Just always down to earth, genuine. Comes to any interview whether you’re holding a microphone from a high school or you’re Barbara Walters he treats everybody the same. George Clooney is like that, always great. Love his attitude, self-deprecating but multi talented. Tom Hanks. Big fan. I also love Robert Downey Jr. Had a chance to get to know him a little bit of what he’s about and it’s so cool to see him back with Iron Man, also a big fan of Halle Berry. I’ll tell you she even looks better in person and I like Nicole Kidman too. There is a lot of them, but the ones that really stand out are the ones that I mentioned.”

You can catch The Mole on ABC Monday nights starting June 2nd at 10:00 PM EST.

You can find more information at the following link: