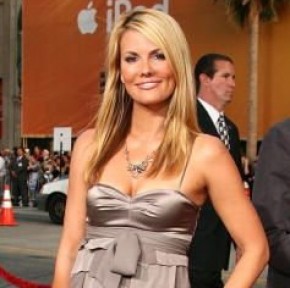 Danica Patrick isn’t the only one who represents women in the automobile world. Courtney Hansen was born into a racing family, has written a book for women on the subject, and continues to host numerous car shows on Spike TV. When it comes to the dating world and her car expertise, she says it’s been a total turn on so far.

Listen to the Courtney Hansen CYInterview:

Courtney Hansen: “I host the Power Block on Spike TV as well, which is compromised of four half hour automotive shows that airs every Saturday and Sunday. It’s horsepower TV and muscle car, extreme four by four and trucks. It’s this block of automotive programming that has been on the air for 20 years since TNN. What Great Builds is gonna be is, we’re going to cover the best project builds that power block has done over the last 20 years among those four shows. Typically when you’re tuning into a power block show, you’ll see half of a build then adding a super charger to a horse engine, them changing the suspension system on an extreme four by four, but you don’t see a whole project from front to back on one show.

Great Builds is going to encompass an entire build from front to back in a one hour show and I host it. I interview the guys or girls who built that particular car and show the build happening on these plasma screens. We bring in celebrity guest car builders as well who talk about that project. There is a lot of different elements to it. It’s a lot of fun. It’s airing prior to power block, which is one of the things the viewers wanted in the late morning. So 10:00 AM, August 17th.”

CY: How has your expertise in cars and being a woman helped you professionally because it’s a rare combination?

CH: “Well, I grew up in an automotive family with a dad who raced SCAA and he’s actually the win ingest SCAA driver with 27 national titles. We use to own Brainerd International Raceway in Minnesota. My whole life was cars and naturally I became an enthusiast. It’s one of my great passions in life. As my expertise, just over the years I host these cars shows and being such a part of the automotive world I’ve really tried. I had to like hone my knowledge, hone the craft so to speak.

I’ve read all the books out there about auto repair and fabrication and wrote a book for women The Garage Girl’s Guide To Everything You Need To Know About Your Car. I felt like there was nothing out there that appealed to women about how to take care of your car on a daily basis. I am always learning and talking to people about cars and I am always trying to feed myself by reading as much as I can. I guess to some degree there is some expertise there. As far as being a woman in this world, I love it. I think it’s so cool that women are taking more of an interest in everything automotive these days.

Love the fact that there is women racers like Erica Enders and Danica Patrick and badass girls out there. I think it’s awesome when girls are working on their cars and trucks and really caring about what they’re purchasing. I hope that I am somewhat of a voice and inspiration in that world for women I hope.”

CY: Turing to your personal life, do guys consider a turn on or turn off when they found out how much you know about cars?

CH: “I’d say it’s 100 percent a turn on without a doubt. I have encountered little to no chauvinism in this world and every man that I know whether he is a huge car buff or knows very little about the automotive world, I find that they’re turned on by it. They think it’s sexy. And they should man. It is hot. Right?”

CY: Yeah. I think so too. So in 2005, here you are, FHM, one of the hundred sexiest women in the world. What did that mean to you personally and do you feel like you are a beautiful person and a sexy person inside and outside?

CH: “Oh gosh. It came as a complete surprise. I was looking through the magazine and I saw that I was on the list and I was shocked. I couldn’t believe it. I was like what? I hope to be beautiful on the inside. That’s my goal and I hope it shines through. It might sound cheesy but it’s true. I think that’s the important thing. Somebody could be drop dead gorgeous and not beautiful on the inside and it just tarnishes their whole physical appearance and it goes the other way in a positive way. I hope what’s going on in the inside shines through.”

CY: Finally, would you be interested in something like a Dancing with the Stars for example or what other projects would you like to do in the future as you continue to expand out?

CH: “Well, I do a lot of non automotive stuff. I have a show on Fox Sports Net called Destination Wild, which is a travel sports show and we go all over the U.S. and visit the greatest places in the U.S. and do adventure sports. So that’s outside of the automotive realm. There has been a lot of close calls to host some really big network shows that are not automotive obviously. That’s certainly a goal of mine. I hope to continue to embrace the automotive niche. I have so many passions and want to reach that world as well. Yeah. I would absolutely do Dancing with the Stars. I actually screened to host that show. I am open. I just want to have fun, continue hosting, doing my thing, and enjoying life man.”

You can find more out about Courtney Hasnen at her official website http://www.courtneyhansen.com/