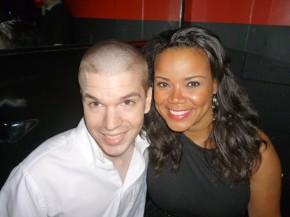 This past Friday I went to the nightclub Score, located on Miami Beach’s South Beach. The club is on Lincoln Road, one of the area’s premiere locations. It was there that I caught up with singer/TV personality Kimberley Locke. Back in May of 2011, I CYInterviewed Kimberley [see here]. Many will recall that Ms. Locke was the third place finisher on season two of American Idol. Since she was visiting Miami Beach, I thought it would be great to catch up with her.

Kimberley is one of those entertainers who is fun, down to earth and leaves you with a good feeling. She gave a fantastic three song performance at Score, with her songs: Change, 8th World Wonder – the first single of her career – and her new single Finally Free [Smashmode version] which is now 49th on the Billboard Dance Club Play chart. Ms. Locke was one of the early performers on American Idol who showed true vocal talent. She certainly wowed the crowd at Score. Her songs have charted to number one on various Billboard charts, over the course of her career.

After her performance, Kimberley and I met up at the VIP area where I was waiting for her. We then enjoyed a nice conversation. She told me about her plans to run in the upcoming New York City Marathon. She will be representing the Malaria No More team. Ms. Locke hopes to finish the Marathon and thinks that, in and of itself, would be a great accomplishment. The Nashville native also mentioned her upcoming appearances in Denver, New York and Los Angeles.

Score, which caters to the gay community, is by far the biggest nightclub I’ve been to in Miami. The club has a dance floor on both its top and bottom floors. If you are looking for plenty of space to dance, the Miami Beach establishment might well be your place for nightlife activity.

A big thank you goes out to the entire staff of Score for their five star service and VIP treatment, as well as to Kathy Manabat, who works with Ms. Locke and took care of all the arrangements. It was a night to remember, getting to hang out Kimberley, who is a great artist and terrific person. I look forward to seeing her again soon.

You can sponsor Kimberley Locke and find more information about her upcoming run in the New York City Marathon clicking here.

You can find more information about Score Nightclub at their official site here.