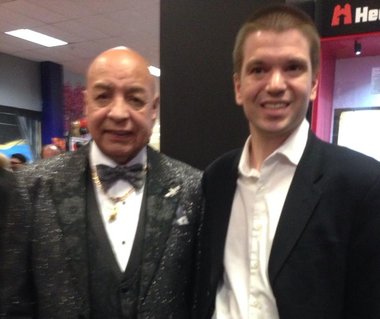 When an opportunity recently came up for Hall of Fame boxing referee Joe Cortez to do something with the 3D Art museum HeadzUp in Las Vegas, he thought of boxing history. Now located in the Boulevard Mall in Las Vegas – at HeadzUP – is the home of the Nevada Boxing Hall of Fame. The exhibit for the history of pugilism was put together in less than a month.

Having officiated over 100 world championship fights in his career, Joe Cortez has seen it all. He was there when a 45 year old George Foreman knocked out 26 year old Michael Moorer, to once again become Heavyweight Champion of the World. He says the fight that made him the most nervous during his career was refereeing Julio Caesar Chavez vs Greg Haugen in front of over 100,000 boxing fans.

Joe Cortez is also part of Hollywood history, having appeared in the 2006 movie Rocky Balboa where he officiated the fight between Rocky Balboa and Mason “The Line” Dixon.

Last weekend, Joe Cortez represented the sport that he has given so much to and vice versa, hosting the opening of the Nevada Boxing Hall of Fame’s new home to the public. With so much pugilistic history in the Silver State, it is no doubt well deserved.

We had a chance to CYInterview Joe Cortez at the opening night festivities.

You can find more information out about the Nevada Boxing Hall of Fame clicking here and at www.headzupvegas.com.