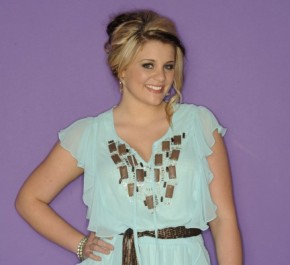 Only 16 years old, Lauren Alaina is an up and coming star. As millions know, she is this years’ American Idol runner up. She’s known for her country singing style. Lauren ended up coming in second, behind Scotty McCreery, this week. CYInterview spoke with Ms. Alaina on the national American Idol conference call the day after the finale.

Listen to the Lauren Alaina interview:

I first posed this question to Lauren, “What do you want people to know most about you from the things that we did not learn about you on American Idol?”

“I am actually really, I’m not really a blonde. People call me a dumb blonde a lot, but I’m actually really smart. I love to go to school and my favorite subject is math. I like school more than anything probably.”

Prior to the American Idol finale, there were reports Lauren might not compete, for the crown, in the final round against Scotty McCreery. She noted this wasn’t the first time there have been issues with her voice. The runner up also thinks she’s gotten a post American Idol cold.

“I have actually, but everyone has trouble with their vocals sometimes. I think I’m getting a little bit of a cold or something cause now my nose is a little stuffed up and my throat’s hurting pretty bad today, but it’s gonna be all right.”

There were reports around the net yesterday that Lauren Alaina and Scott McCreery are dating. Earlier in the conference call, she told another member of the media from People Magazine they are not in a relationship and were just friends.