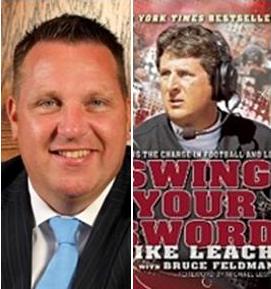 One year later, we welcome back Coach Mike Leach and Rob Gill, with featured columnist Jay Bildstein joining us this time, for an important discussion about coaching and training fundamentals, which can help lead individuals and organizations to success.

You can read the highlights and listen to this entire CYInterview segment below:

Listen to the entire CYInterview segment:

When this panel was conducted back in October, Mike Leach’s Washington State Cougars were 4-4. The team ended up finishing 6-6 and qualified for postseason play for the first time in 10 seasons. They will be playing Colorado State today, in the New Mexico Bowl.

Summing up his team this year, Mike, at the time, told us this:

“Well, we’re still a work in progress. We’re a pretty young group. We’ve got 27 sophomores and freshman out there playing. I think we’re much improved and we’ve played a pretty tough schedule up to this point. The teams we’ve lost to have a combined record of 25 and 3. So, you know, part of what we need to do is just keep working hard, keep improving. … The biggest thing is worry about what you can control and that’s part of winning your individual battles one play at a time and just worry about one game a week.”

As an international columnist, motivational speaker, entrepreneur and corporate training veteran, Jay Bildstein – CYInterview’s resident featured columnist – talks about what is important when it comes to training and coaching:

“First of all, I believe it’s important not simply to train folks, but to educate them. I think when we educate people, we give them kind of the rudiments and fundaments in the background of whether it’s an endeavor in the corporate world or in a game itself. I think of Mike Tyson and boxing. He was extremely well trained by Cus D’Amato. At the same time, he had a very strong boxing education. I think education and training go hand and hand.

The second thing is really pulled from the area of exercise science which is train, don’t strain; which means I believe there does come a point when you train that there can be diminishing returns to scale, that you really have to find your Goldilocks level of training; not too little and not too much, an amount that’s just right.

And last but not least, I think that training has to be purposeful, not punitive. And so I think that every time we do something, every time we get into an exercise that relies on practicing, drilling and rehearsing a skill, it should be done with the purpose of mastering the skill. It should not have really an inherently punitive characteristic to it.”

Being around basketball greatness in the Hurley family gave financial services professional Rob Gill the kind of up close, courtside view to people setting goals and then achieving them. The former college basketball player tells why having a skill set is important to success:

“In basketball, if you shoot X amount of jump shots a day, let’s say for example if you’re just, you know, sitting there shooting, you know, five, six hundred jumpers, but you’re standing still. You know, versus, I think Jay just talked about some scientific training whereas if you’re shooting those jump shots but you’re doing it under basketball stress or the conditioning of basketball, if you begin to perfect that daily control, as Coach Leach says, control what you can control.

If you begin to perfect that as best as you can on a daily basis, obviously your level of success is gonna really be able to go higher and higher, especially when you’re surrounded by top level competition. As we all know, competition always brings out the best in people or sometimes the worst in people. And then when you tie that into what I do on my side as far as business, the things I didn’t do in basketball growing up I more than do now on my business side and it’s really trying on a daily basis to perfect the small stuff as best as I can.”

Mike says the thing that his football program in Washington State takes the most pride in is practice. He speaks about some of the fundamentals of practice and what it needs to be successful:

“The thing about our program that we take the most pride in is practice and the items that, you know, what we do, what period, when and so that once you make the choices and the hard thing is to make the choices of what plays you’re gonna run in our case and I’m sure in business or some other field it’s specifically what you’re gonna be good at, what you’re gonna achieve, what your identity’s going to be, once you select that, then it’s like, it’s how you develop those skills and I think you need to do it over and over as precisely as possible and I think don’t forget about the over and over part. …

If you’re doing something over and over and it’s not very precise, you’re wasting your time. … Don’t be afraid to work hard, but don’t forget the definition of insanity which is doing the same thing over and over again, expecting different results. You know, if you’re not putting the results you want and you’re not on the path as far as developing those skills, you gotta look at different methods and different ways to do things.”

During the panel, Rob asked Mike if his days as a lawyer were helpful to him today in sports and if there were similar experiences. From his days in law school, the 2008 College Football Coach of the Year provides an important thought on how you cannot cover everything and choices have to be made:

“The way the lawyer thing does is, it kind of organizes your thinking. I mean as you go through law school, you understand that you can’t cover everything. It’s not possible to cover everything so you gotta make choices and prioritize what you’re gonna put your efforts forward the best and you know, just understand on the front end you gotta make choices and then you gotta maximize the items that, well features your team the best or your effort the best and I think I draw on that every day.”

Mike in return asked Rob his thoughts on what St. Anthony High School basketball coaching legend Bob Hurley Sr.’s fundamentals were, on putting a team together and covering what was important:

“The thing that I recognize more than anything with him is consistency. I mean, you know, whether his sons went to Duke and Seton Hall, whether they went to the NBA, whether they won national championships in college, he still coached St. Anthony’s. He never left St. Anthony’s. He never, every year I’m sure there’s many, many offers for jobs on the college level and he just consistently, not only coached St. Anthony’s, but obviously is very, very big in the community and helps a lot of these kids that could make it through his program and then get to college and hopefully at that point it’s up to them based on what they learned. But I would say that consistency and competition and obviously attention to detail and his ability for X’s and O’s and everything else, you know, is always been incredible.”

To close, Jay shares with us his fundamentals for success, from being a trainer in the sales industry: