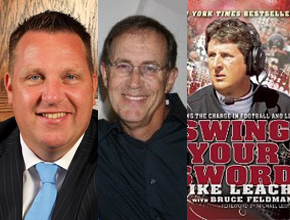 With a challenging economy and millions of unemployed and underemployed Americans, we could all use some inspiration right about now. With that, we thought it would be a good idea to bring forward a panel on coaching and its importance, not only in sport but in society as a whole.

Accordingly, we brought together three stellar individuals so that they could share with CYInterview’s listeners/readers some of their experiences as relates to the world of coaching.

Even if you are an optimistic individual, who is on the right track to accomplishing your goals, the words of Mike Leach, Andy Hill and Rob Gill are sure to energize and inspire you. These three men have something important to share about the role which coaching and mentoring plays in helping a person achieve their dreams.

Mike Leach – Mike Leach is the head football coach of Washington State and the 2008 College Football Coach of the Year. Currently, his New York Times Bestselling book, Swing Your Sword, is out in paperback. He is a CYInterview regular. You can listen to/read Coach Leach’s last conversation with CYInterview, prior to this panel: here.

Andy Hill – Andy Hill returns to CYInterview after speaking with us back in 2010 [see here]. He is the former president of CBS Productions. Andy is also a former college basketball player. He played for one of the greatest coaches in the history of sport, the late UCLA basketball coach John Wooden, who passed away in 2010 at the age of 99. Andy puts out a monthly coaching newsletter, which has broad application to life and the business world. It is titled, Hollywood and Catfish. Mr. Hill also authored the book, Be Quick But Don’t Hurry.

Robert Gill – Robert Gill played Division III basketball at Castelton State College of Vermont. Today, he is a professional in the financial services industry. Rob was exposed to greatness at an early age, when he had the benefit of coming to know the arguably greatest high school basketball coach in history, Bob Hurley Sr. of St. Anthony’s High School in Jersey City, New Jersey. Rob also spent time around Bob Sr.’s sons Bobby Hurley, who played for Duke University and, subsequently, the Sacramento Kings of the NBA and Danny Hurley, who is currently the head basketball coach at the University of Rhode Island, a Division I school. Mr. Gill is a relative of the Hurley family.

To enjoy a memorable and motivational experience, you can read the highlights and/or listen to this very insightful CYInterview, in its entirety, below:

Listen to the coaching panel with Mike Leach, Andy Hill and Rob Gill:

For Rob Gill, being exposed to the basketball greatness of the Hurley family helped him learn some important lessons that have served him well in his work life:

“You begin to realize all of the things that were witnessed, which started with hard work and passion. You sprinkle in desire and if you look at all the St. Anthony’s teams and the teams that Danny and Bobby are coaching even to this day and Bobby [Jr.] at Duke, it was all about teamwork and that always created belief and confidence and some of the things that I now take in my business world.”

When it comes to today’s youth in sports and education at the college level, Mike Leach has always made it a priority that his players earn a degree. He has some of the highest graduation rates, for his players, as a head coach of a college football team. The majority of all college athletes will not end up in professional sports. Coach Leach believes a student athlete should get their degree:

“If you’re truly a motivated individual, you’re gonna take an interest in improving yourselves in a lot of ways besides just what you’re doing on the football field or the basketball court. … As long as you’re here, I think it’s important to get it [a college degree]. Beyond that, I mean there’s a practical aspect of it with me. If you could get them to focus on their academics and getting their degree and improving themselves as an individual, then you’re gonna have less problems out there on the field and then also you’re gonna be dealing with motivated, focused people that, you know, that are making sacrifices for what’s important to them. …

Of course, you get people from a variety of backgrounds and even those from the most distressed backgrounds generally speaking all want to get a degree. Sometimes it’s just, you know, that they’re the first person in their family to get a degree and in some cases they just don’t have the tools. They may know how to work hard on the football field, but they don’t know how to work hard in the classroom and then you know we need to teach them, push them, prod them and motivate them and certainly make it more convenient to go to class than it is to miss class.”

For the millions of Americans who are currently unemployed, Andy Hill tell us what the late great Coach Wooden would say to someone who is out of work and how they can keep going during challenging times. He says Coach Wooden’s message was all about what you can control:

“I suspect it would be very much along the lines of, you know, if you have a process that you’re going through where you’re applying for jobs, if you’re making networking connections, if you’re pushing every day, if you’re not giving up on yourself, if you’re continuing to look to further yourself, and educate yourself, and train yourself, then you’re doing what you can do. It’s not a panacea, but at least it gives you the best chance in my opinion, of a positive outcome.”

The current generation of America’s young people have been called the lost generation by some media outlets. That seems an unfair characterization of a generation with so much promise. However, there are many children, teenagers and early twenty something’s who see an America where economic opportunity is lacking and they well might feel hopeless when it comes to achieving their dreams. I asked all three men, who have achieved much in their professional lives, what advice they could give to fellow coaches, mentors and the youth of America on how to stay on the right track and stay focused to accomplish their dreams.

Mike Leach went first, saying today’s youth need to be given something to work towards and look forward to:

“I think the most important thing is keeping them excited. No matter what they do, they need to be excited. They need to be excited to wake up in the morning. … That’s gonna involve direction. They need to be working toward something. You know and it’s funny, I mean, ‘cause I’m right in the middle of the season now and we don’t have the most talented team I’ve had, but we’re growing. I mean, I wake up each day because you know I’m consumed by it, I mean you know whether you go from a day that’s a nightmare to ridiculously exhilarating and all points in between you know and the thing is it’s consuming.

I think at some point you need to provide opportunity for them to get consumed with something and get excited about it. Two of our goals that, you know, our main goals on our goal board, be the most excited to play, be the best at doing your job. I think that no matter what you do, that kind of applies because that’s sort of the fuel that picks you up in the morning and that pushes you to achieve.”

As a professional in the financial services industry, Rob talks about how he works with young people when they exhibit interest in his line of work and he has some advice for coaches/mentors when working with them:

“I think when I sit down, with once again, young men and young women, what I try and do is right off the very top, I want to create a scenario where they understand the truth. And if they’re gonna get into the business I’m in, it’s gonna be a lot of hard work, it’s gonna be passion. You know somewhere along the way they can decide to write their own paycheck, but it’s not something that’s gonna be an overnight success.

I never wanna have somebody come in here with expectations that I misled them on. So I try and be 100 percent truthful all the way through on exactly what to expect. And as a result from that, I start to see you know young kids that are coming in here that you know, they’re looking for work, they wanna succeed, they have a dream…I think it’s about you know showing them that there’s a rainbow, there’s success; success leaves clues as you know and along the way if there’s good teachers and everyone’s on the same page, you’ll recruit the type of kids that you want and you can’t force them to drink the water, but the ones that really want to succeed, they’ll come to you.”

And Andy Hill provides some lessons that will ring true for anyone, no matter their age:

“Be enthusiastic. Do something you love or that has something to do with something you love. You know make use of the greatest tool that any learner has, a question mark, curiosity, be thirsty, want to get better. And be persistent, work hard, don’t expect anybody to give you anything and stop looking backwards at the jobs that you wish you had five years ago ‘cause the good jobs that are gonna be there five years from now, many of them don’t exist today. So get an education, be curious, and enthusiastic and be persistent, good things will happen.”

As the one guy on the panel with no basketball background, Coach Leach provided this interesting analysis in our closing:

“I’m not a basketball guy. I’ve never been any good at basketball and I don’t understand basketball, but I know a lot about Coach Wooden. I’m in the middle of Andy Hill’s book and you know the thing that the Hurley family does is they’re so blue collar to the point where you know the first thing that hits your mind is you know what, I could do that. Now, the fact of the matter is that I couldn’t, but in other words they’re that little can do it to the common man. Yes it is possible. You can do it. Look at us, we do it and here’s how we do it. Well, then there’s a rare select few, of course, like Bobby that can.”

You can find more information and purchase a copy of Mike Leach’s new paperback edition of Swing Your Sword: Leading The Charge in Football and Life clicking here

You can learn more about Andy Hill’s newsletter Hollywood and Catfish at http://www.hollywoodandcatfish.com.

4 Replies to “CYInterview Coaching Panel: In Pursuit of Excellence – A Roundtable Discussion on the Importance of Coaching; Featuring Mike Leach, Andy Hill and Rob Gill”