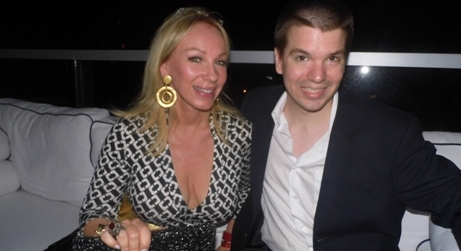 The last year has been one adventure after another for Miami entrepreneur/philanthropist/socialite Lea Black. With the expansion of her skincare line, her handbag collection now in stores and a novel slated for publication in 2014, The Real Housewives of Miami star is busier than ever.

From her office in Brickell where we first CYInterviewed her back in January [see here], to our second CYinterview at her home in Coral Gables [see here], to attending The Blacks’ Annual Gala at the Fontainebleau hotel [see here], to being invited back to her home for a private party with country music star John Rich [see here], we have seen the lovely Lea in a host of Miami contexts.

Recently, we have added one more quintessential Miami spot to our Lea Black collection, South Beach. We spent time with Lea and her husband Roy at the Gale South Beach and Regent Hotel during the Miami Beach Gay Pride Soiree, which we covered [see here]. Ms. Black was a host for the evening’s festivities and gave a terrific speech about the LGBT community.

We caught up with Lea to speak with her about all things Real Housewives of Miami, as well as the latest in all areas of her life. During our CYInterview, her husband, past guest [see here and see here], attorney Roy Black made some comments, which helped round things out nicely.

Speaking about lending her support to the Miami Beach Gay Pride Soiree, as a host for the evening’s affair, Lea told us this:

“We’re here tonight to support the gay and lesbian pride parade and support the LGBT community and we’re all about, you know, equal rights for everybody. So I’m proud to be part of it.”

Lea, considered the social Mayor of Miami, got back recently from filming the reunion special for The Real Housewives of Miami. Joking with us that she is sworn to secrecy and her lawyer is present, her husband Roy Black makes a cameo during our CYInterview, saying to Lea, “Give ‘em some of the highlights. Go ahead.”

Lea said, “I can’t. I’m sworn to secrecy. I thought he was gonna say anything you can say will be held against you. I will say that it got very fiery. It got a little below the belt many times. Some of the girls went for bottom feeding, gutter trash talk and it was feisty and I was speechless many times with how far some of them would go for attention.”

Roy followed up asking Lea, “Did they discuss any body parts at the reunion?”

Lea said, “They actually did, a couple. I’ll leave that for you to tune into.”

When it comes to her skin care line, Lea gave us an update on her goals for her facial products. Her products range in cost from $19.95 up to $95.00.

“What I’m really wanting to do is build the U.S. market and I did that in the 90s and then I sold the company and now I’m gonna do it again. … It takes a minute in the morning and two minutes at night and you can have flawless skin and, you know, the same products I’ve been using for 20 years.”

When we last spoke with Lea in April, her handbag line was brand new and just being introduced to the public. Six months later, the handbags are now being carried in various stores:

“I know. I mean, my handbags took off. It was just a fluke. It’s like I started making them, having them made for myself because I wanted timeless, iconic pieces that were not trendy and that were affordable. So I had bags from $100 up to, on up and all of a sudden they just took off and the stores are taking them and customers are buying them on www.theworldofleablack.com and I’m pleasantly surprised.”

Back in August, Lea gave us a copy of a manuscript for her novel on Miami high society. After reading it, I believe she captured the essence of Miami and all the different personalities inhabiting the city. Those who want to experience the Miami social scene, albeit in fiction, should read it. Lea says the book will be released in 2014:

“It’s not based on anything that’s a fact, but it is based on things that happened at these events. So there’s a lot of truth weaved through it. … I’m hoping after the first of the year and I just did the final edit and I had a lady from Vanity Fair read it and she said she thought it was very Truman Capotesque and I had some guys from L.A. that said it should be a great mini-series. I’ve had people say it’s Jackie Collinsesque. So, I don’t know. I’m hoping for the best.”

For the last 19 years, The Real Housewives of Miami star has done The Blacks’ Annual Gala to raise money for at risk youth to benefit The Consequences Foundation. She’s not sure if she will hold the 20th annual event next year:

“You know, I’m trying to not do it, but I mean, if I don’t do it, who’s gonna do it? And the kids need the money. It’s a lot of work year round, 19 years of it. I’m really, I’ve tapped into every resource, I’ve begged for every dollar, I’ve asked everybody I know 100 times. So it’s getting harder. So I’m gonna let it, see how it flows.”

It feels like we have been everywhere with the entrepreneur and philanthropist over the last year in Miami, except for South Beach where this CYInterview was conducted. Lea has made it clear she is not a big fan of the beach today, like she was when she was in her 20s, but still thinks South Beach is fabulous:

But what I don’t love about South Beach is the traffic and the parking and the amounts of people that are here, but what I love about it is the amounts of people that are here, the energy and the fabulousness of it. So you have to get yourself, if you’re gonna go to South Beach on a weekend night, you’ve gotta set yourself up for ok, I’m gonna go with the flow. You know, if I get parking, fine. I wait for the valet for an hour, fine. If I get a seat in the restaurant, great. You just have to go out and have a good time. You can’t go with like a set agenda because it’s never gonna work out the way you think.”

As season three of The Real Housewives of Miami comes to a close in the coming weeks, Lea sums up her reality TV experience:

“I think part of the moral of the story is that people will do anything for attention. They will lie, they will stoop to the lowest common denominator of mankind and amongst all of it you have to sift through and decide what’s real and what’s not real because a lot of people will do anything to stay on that show or for attention. Others just want to have fun and I’m in the group that just wants to have fun.”

You can find Lea Black’s handbags, skin care products and more at her official website www.theworldofleablack.com.

You can find more information about Miami Beach Gay Pride at www.miamibeachgaypride.com.